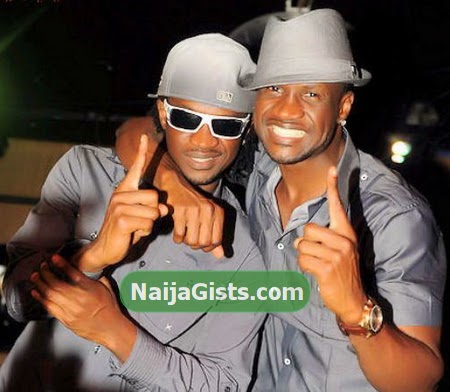 The award-winning musician today shared a series of messages on the social media that indicated the end to the tension in their family.

Tweeting early this morning (Friday) via their various twitter handles, Paul @rudeboypsquare said: “PSQUARE! Stronger than Ever!!!”. His twin brother, Peter followed suit with a short tweet @PeterPsquare: “FOREVER PSQUARE!” and Jude @judeengees sealed it with “Family is everything indeed. Long live PSQUARE!”.

These tweets came in spite of the initial denial by the duo’s publicist, Square Image Associates, saying the reports were some handiwork of mischief bloggers.

According to insiders, peace returned to the family a day after P-Square’s elder brother, Jude Okoye got engaged to his girlfriend, Ifeoma Umeokeke.

“We all have read various stories about the alleged split of the twin sensation P-Square. Sure most of them are not true, but what is true is that there was some tension between the siblings – just like any other siblings. I can tell you that the whole thing is over between P-Square and they are back to being the duo we all like,” said one entertainment journalist close to the duo.

Signs of trouble were noticed in the family when Jude on Easter Sunday, 20 April, released a disturbing tweet that immediately went viral: “After over 10 years of hard work, it’s over. Am done.”

This was followed by Paul’s message same day on his facebook fan page: “After the storm comes the calm. Hoping for better days ahead as one family. God’s intervention”.

These suggested to all that there was a crack in the family, and the news of their impending breakup went viral with various allusions to the cause of the rift.

While some have alleged a cold war between Jude and Peter’s wife Lola, (Jude didn’t attend their wedding last year despite the fact that he was in Nigeria), others have alleged creative differences between the brothers.

There were reports of the twins recently engaged in a brawl during rehearsals, and angry Peter, who suspected an alleged gang-up by his brother, contemplated moving his family out of their Omole, Lagos palatial home he shared with his brothers. They were also said to be at the verge of sharing their properties.

Reacting to people who are pointing accusing fingers at her for being responsible for the crack, Lola simply said on Twitter: “I think silence is the best answer.”

But many have since intervened in the squabble, pleading with the brothers to allow peace and reason prevail.

Ovation publisher, Bashorun Dele Momodu was one of the celebrities who first reached out to the brothers at the height of the squabble.

Momodu told the brothers to realise that they are the biggest musical duo in Africa.

“We should not judge on the basis of who’s wrong and who’s right; the illustrious P-Square family made Africa very proud.

“Nobody will benefit if they split. The power to make money is in their togetherness,” he said.

Hmmmmm so Jude Okoye’s engagement is what brought peace to the family…. Na wa ooooo.