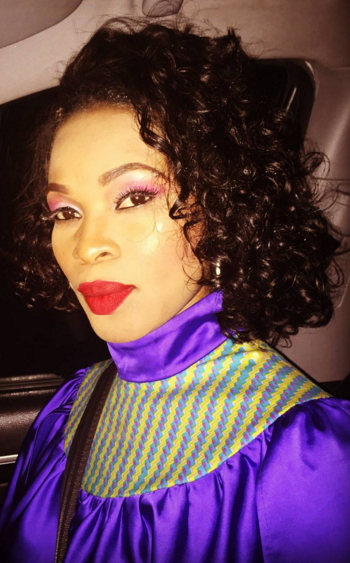 She initially chose to ignore them but when the attackers became persistent, the mother two has no option than to express her displeasure.

Georgina Onuoha took to her official IG page today to voice out her anger on one of her fans who had earlier voiced her opinion.

“I don’t know why people cannot keep their opinions to themselves. Meanwhile, they are the most miserable in life. “Oops I forgot, she said President Buhari made her an ambassador, she actually calls herself an ambassador.
“But it’s not what you think, it’s a student university ambassadorship recruiting, I guess so she can be paid.
“Looking at this picture of her speaks volumes; she desperately needs attention and a man. The last time I checked, only street girls dress this way.”

“Go get a life okay. And learn next time how to write on people’s walls about matters and issues that do not concern you. Peace girl.”
“Time to start exposing faces of bigots who sit behind computers vomiting hate over people they don’t know or issues that they don’t have a clue about.

“Her Name is Vivian Rowland on Facebook. Please help make her famous. Usually I don’t respond to such shenanigans, but this thing over stepped her boundaries.
“Individuals like her thrive on other people’s pain for gain,”.

The actress recently returned to Nigeria to start a new life months after she dumped her US-based alcoholic husband.