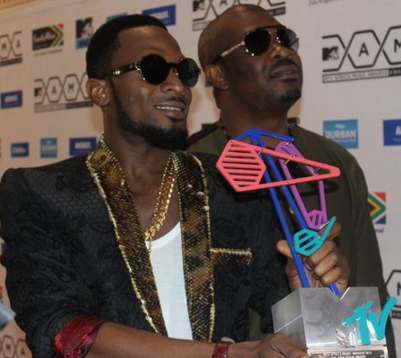 Our correspondent gathered that foremost producer and Mavin Records boss Don Jazzy was at Eko Hotels & Suites venue of the birthday bash along with his erstwhile bosom friend, D’Banj and birthday celebrant, Murray Bruce, a Senator representing Bayelsa East.

D’Banj, midway into his performance, had paused to invite Bruce on stage and told everyone of the Silverbird Group founder’s birthday request that the one-time buddies and business partners (Don Jazzy and D’Banj) should honour him (Bruce) by reuniting to make one more song.

The Kokomaster said he sees the possibility of working with Don Jazzy again once his friend is ready.
“Consider this request done sir. I am ready. Once Don Jazzy provides me with the beat, I am ready to lay on song on the beat,” D’Banj said.

Right there a little drama ensued.

Don Jazzy was invited to join them on stage but the prolific hitmaker tactfully declined the persistent calls, even from Senator Murray Bruce. He was later discovered to have left the party.
This set tongues wagging that Don Jazzy deliberately sneaked out to avoid performing with D’Banj and not willing to settle their rift.

This assumption gained fillip after the Kokomaster hinted that he had actually asked Don Jazzy back stage earlier to kindly join him on stage during his own performance.

But as the news that he deliberately snubbed D’Banj got to him, followed by the flurry of Twitter message from some fans who bombarded him with questions about why he had to sneak out of the venue, Don Jazzy immediately took to his Twitter timeline to explain reasons for his action.

Don Jazzy said he had left the venue long before D’Banj mounted the stage and already declined performing with other artistes at the same event.
His tweets: “Haba na whats going on pls?…I already announced that I am taking a break from being an artiste. Hence why I didn’t perform ‘Surulere’ with Dr Sid and ‘Concur’ with Timaya…

“My team also performed tonight na guys. I didn’t show up. I am not an artiste, I take GOD beg una… Moreover I had left the venue way before Dbanj’s performance though.”
The Mavin Records boss further added that contrary to those insinuations that he was avoid making up with his erstwhile friend, he said himself and D’Banj have performed together three times in the last one year.

“But now I’m on a break oooo,” he ended his tweets.