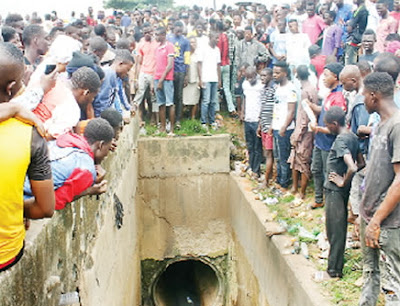 Nov 12, 2017 – Ritualists Now Have Branches In Most Nigerian Cities, How Humanity Is Being Sacrificed On Altar Of Greed

An Opinion article by Oyinkan Medubi

How Some people have sacrificed their humanity at the altar of their greed for very filthy lucre.

This is kindness week. In Nigeria, however, it is no longer fashionable to be kind. You give people rides or money or clothes at your own risk or at their own risk. Going by the stories I hear, the whole thing has me confused. Should I run from people or should they run from me? There is so much preoccupation with ‘making it’ now that no life is sacrosanct – not mother’s, not father’s, not brother’s, not friend’s. Nigerian streets have become places where you ‘proceed with extreme caution’ because the ides of march truly walketh abroad. Now, whenever a relative of mine takes a taxi or Okada in any Nigerian city, I cry, ‘beware… beware!

The why is pretty straightforward: Nigerians have descended to pure and downright cannibalism. It is said that there is no country in the world where you cannot find Nigerians. Even the moon has one or two. It is also said that wherever they go, Nigerians excel, in the most marvelous ways too. Yet, those of us remaining at home just persist in going at cannibalism, ancient style. I think they call it the Nigerian virus.

I don’t know what this virus looks like but I can swear it is deadly. Right now, I have a message in my phone about someone who had taken an Okada ride which broke down along the way. Pronto, a taxi showed up in which there were already two female fares or passengers as we call them. It turned out the taxi was taking them all on a ride to hell by a previous arrangement; that’s right, a ritual killers’ hide out.

So, we now have a Nigeria where kidnappers are so established they are regarded as ‘Kidnappers, Plc.’ They are regularly wined and dined by the high and mighty and appealed to for financial donations into socially beneficial causes. We also now have ritual killers who have become so overtly confident they are establishing ‘branches’. Yep, it’s Ritual Killers, Plc. And they are said to be ‘making it’, because ‘body parts are in demand’. Seriously, how bad is this virus?!

Very bad. Just the other day, it was reported in the newspapers that a student in a tertiary institution had been kidnapped but released after being forced to drink blood. According to the report, the student did not know the source of the blood. I think it’s bad enough that he was kidnapped and made to drink blood, any blood, in the first place.

It is a bad virus that does not make us even recognise kith and kin in our pursuit of happiness. Most Nigerians have now quite convinced themselves that it is only when they have money aplenty that their happiness is complete. So, there is now a frenzied pursuit of it out there that quite literally befuddles the senses. People are ready to sacrifice anybody near or far at the altar of self-worship. And it’s because we have lost the ancient paths of kindness, the only thing in life that does not change character.

Take the family, that eternal seat of unquestioning love. When Lady Macbeth in Macbeth bemoaned the fact that she had lost what appeared to be the milk of human kindness, many wondered if she ever had the duct that produces it in the first place. Many are wondering the same thing about Nigerians right now. They have sacrificed their humanity at the altar of their greed for very filthy lucre.

Sacrifices can take many forms. The most common one is slaughtering an animal. For instance, many husbands have gone to bed thinking all is well between them and their wives only to wake up in the morning and find that a price has been placed on their heads by the wives. Sometime in the busy day, many a wife has managed to contract out her husband’s head to hired killers. The same thing goes for many wives. While thinking that all is right with the world, many wives would not thus hesitate when their husbands say, ‘let’s go somewhere.’ That somewhere may turn out to have an Okija shrine priest waiting at the end of it.

Same way, many children have been thrown up in auctions (if they’re lucky) or killed. Brother has done it to sister and I have a message in my phone to back this up. All of these killings are sacrifices to the hungry god that is said to bring in the fortunes and allow the survivors to live lavishly. Whether it actually does is no point here, but surely, you can’t believe…

There are other types of sacrifices that kill kindness. Discipline in the family can be sacrificed at the altar of wealth. Spoiling children and allowing them to have access to everything they want is not kindness. Indeed, it is the greatest unkindness. Sooner or later, that child is going to want the head of the parent on a silver platter.

Many government officials have frequently sacrificed the well-being of the nation to their own greed. At that altar, the nation bows her poor, lovely head when the official’s greed cannot find any boundaries. I think they say ‘it knows no bounds’. It is actually kindness biting the dust.

Many places of worship have been founded on the lives of many young people sent to early deaths by pastors greedy for filthy lucre. The discovered sculls of the youngsters tell the stories. Social media also does. I have a message with pictures about a young boy who was found buried inside the walls of a church under construction. He was lucky; he lived. I guess the pastor had dreams of a superstardom kind of life, complete with private jets, fleets of cars, overseas travels, endless hotel stays, etc., even if he had to kill kindness to get it.

I still wonder though why Nigerians think that by making money the focus of life, somehow, things will be all right. A money-centred society has never been shown to be all right. It is only a work-centred society that thrives. This is a society where everyone does his duty not in hope of unlawful gain but as a matter of justice, i.e. working for the day’s pay. I think it should be clear to all by now that the only way to true wealth is hard work. I’m not the only one saying this. Listen to these people: ‘You will get all you want in life, if you help enough other people get what they want’ – Zig Ziglar. ‘The harder you work, the luckier you get’ – Mike Adenuga Jr. ‘Luck is the dividend of sweat. The more you sweat, the luckier you get’ – Ray Kroc. ‘Opportunity is missed by most people because it is dressed in overalls and looks like work’ – Thomas Edison.

There are many more of these quotations telling us that we do not need to descend to horrific acts of unkindness in order to ‘make money’. No one needs to sell or kill anyone in order to make money. We just need to work hard, at the job and at kindness. Very often, kindness begets kindness and if you don’t believe me, ask Sir Fleming, the discoverer of penicillin. His father was said to have been kind to Winston Churchill in his youth and Winston’s father took up his education. Let’s kill this Nigerian virus, and let kindness rule again, ok!.