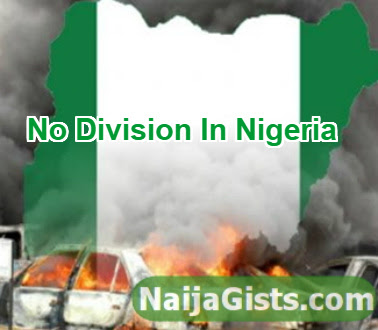 September 16, 2016 – Why Political Or Tribal Division Of Nigeria Can’t Solve Our Problem

The level of human right violation and failure to follow Nigeria constitution is what has actually made many Nigerians to wonder the type of democracy we are practicing.

Despite the fact that I am personally not pro-Biafra or a supporter of it,I have so far seen repression,oppression,intimidation,unlawful detention and arrest of members of the biafran movement without any just reason.

This harmless civilians have been unjustly massacred by the security forces in a level of killings never seen in any other tribes in the country in an effort to silence peaceful dissent.

Nnamdi Kanu has been in detention since October 2015 without any concrete evidence required to try him in the court of law. Such a prolong detention of any person that would run up to eleven months without trial of the suspect is not just a violation of human right but a move that is unconstitutional.

The Nigerian constitution was created to have our action guided and restrain in certain ways whether you are a powerful figure in the government or a less privileged citizen in the country. The government must acknowledge that the rule of law is effective regulatory machine that brings order and good governance to any society. Whatever status we have,whatever post we hold,we must succumb to the rule of law.

Failure to follow the constitution and the rule of law will surely lead to a state of anarchy,chaos and quagmire.

Oppressing the Biafran group will only spark more uprising from them that will overstretch the government capacity to maintain peace and order at a time when they are heavy-handed with all sort of militants and terrorists activities in the country.

The call for Biafra has also emboldened the Niger Delta militants to come up with various dispositions and readiness to declare their own independent in the oil rich region. The ongoing marginalisation of the south southerners have seen many of their source of livelihood disappeared or evaporated due to unstoppable oil exploration which in turn has given birth to various armed activities in the region.

This is what led to the recent pledged between the Niger Delta Avengers and the Biafrans. This further shows how dangerous and volatile the situation now look.

Rather than opting for the use of military force to quell this movement, the federal government should seek for a peaceful dialogue with them. Understand their plight,complain,agitation and see how to reach common ground for peace and mutual understanding so that good governance and development which I firmly believe they are lacking can be restore back to that part of the country.

Federal government reticence to seek for dialogue with the biafran movement might encourage more agitation and rebellion.

More so, since dialogue is considered a powerful tool and instrument in the hand of any government to resolve difficult issues like the one on ground now, the federal government should come up with action and plans that will directly deal with the root cause of their problem. This pattern will no doubt go a long way in discouraging this movement which mostly emerged as a result of lack of good governance in the south,south and south eastern part of the country.

Above all, I will not encourage the division of Nigeria as a way to solve the issue of marginalisation which has also hit other part of the country.

I believe great thing can, and will happen when we remain one as nation.