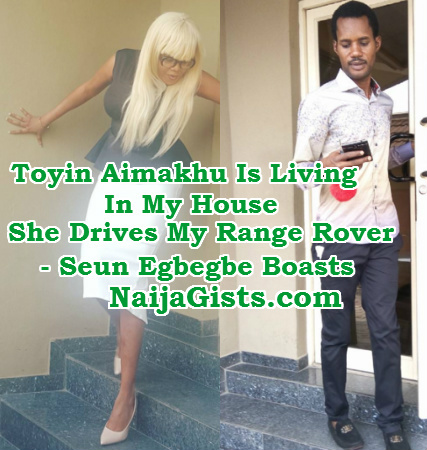 Feb 19, 2016 – Seun Egbegbe: I Didn’t Kidnap Toyin Aimakhu, She Is My House Wife, I Only Seized Her Phone On Kemi Korede Movie Set

Ebony Film boss, Seun Egbegbe has finally debunked the viral rumour that took the whole of Ibadan by storm yesterday.

Seun was accused of kidnapping Toyin Aimakhu on a movie set after news broke that she was crying over a UK-based comedian who threatened to commit suicide earlier this week.

To cut the long story short, Mr Egbegbe took to his official IG page late yesterday to say the following:

“Lol this is funny I don’t do this but I really think Is needed# cos i need to clear my hand off what I was wrongly accused of#is it possible for a man to kidnap his woman living in his house as house wife#if I kidnap her who will pay the ransom ask by the kidnappers #am in my house when I read a post on Instagram that I kidnap my wife @aimakhutoyin #let just give a clue of what happen #i was at home in my living room this morning when my friends and family called me about toyin post on Instagram that she post another man as her crush# and crying about the man on her page ur husband doing everything I want for u that is what is called adultry ,she left from my house this morning to kemi Korede movie shooting so I was angry and I went to the movie location I took her phone from her#cos I don’t want a slap on my face anymore#i guess taking that step is not too much me #how can I kiddnap a woman with my car of millions of naira# I won’t say more than dia but I know very soon the truth will be out soon#but the comedy I love about the all story is that she said I kidnap her phone she kidnap my rangerover jeep” 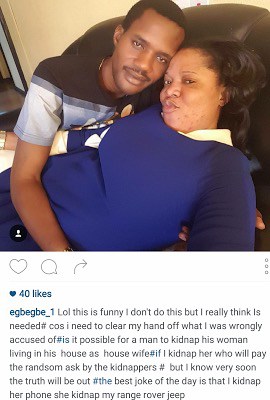 As we speak, Toyin Aimakhu has no access to her official IG page.

Her jealous ‘Oga On Top’ is yet to release her iPhone.

In Pictures: Nollywood Actress Bimbo Akinsanya Enjoying Motherhood
Photo Of The Day: Woman Selling Akara In A Canoe On The Creek To Feed Her Family