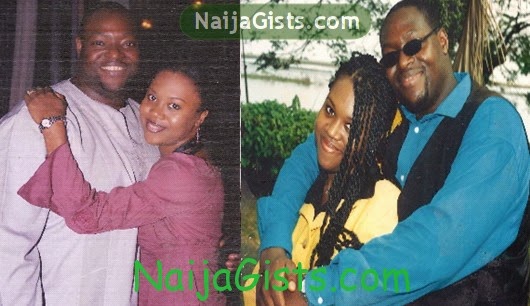 As her annual tradition, Nigerian actress Stella Damasus has remembered her late hubby, Mr Jaiye Aboderin who died of heart attack in 2004.

Jaiye Aboderin passed away after a sudden heart attack during a basketball session with friends on the 3rd of December, 2004.

Stella Damasus has made it a yearly tradition to pay tribute to her deceased hubby and has encouraged fans to do the same reminding them all of Jaiye stood for.

Few hours ago, the mother of two took to her social media accounts to pay tribute to the father of her kids:

“My late husband passed away exactly nine years ago and it still feels like yesterday. Time never heals wounds, it just makes it lighter to carry. As I remember jay today I ask you all to please remember him in your prayers. He left a huge legacy in our hearts and in his children. My love for him can never die, it can only grow stronger. Rest well JAY.”

The controversial actress was accused by her husband’s family of killing him.

They claim she killed him due to her adulterous lifestyle.

Since the death of Jaiye Aboderin, the actress has remarried three times.

Her current marriage remains the most controversial when she allegedly snatched her colleagues hubby. Stella Damasus is legally married to the former husband of Nollywood actress Doris Simeon.

Stella and Daniel Ademinokan are currently in the United States of America.

She came into his life as as subtle business partner and the rest is history.