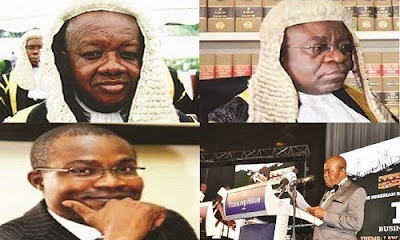 A lot of people have approached this issue like we always approach everything: it’s either Arsenal or Chelsea, APC or PDP, Black or White, Yes or No, Right or Left… but as Aristotle will say, “Virtue resides in the centre, all others at the extremes are vices.”

We need to stop and realize that most times progress and national interest is not in the right or left but in the middle; most times truth is not white or black but a shade of grey. My stance is a little bit of there and here…

Assuming and even partially conceding they are corrupt… Yes, the DSS has tons of evidence against them… Is this the proper way to arrest a justice of the Supreme Court or a judge? Even when a man is sentenced to death, there is a proper way to kill him. If a man has been sentenced to die by hanging, you can’t just take him out and gather your family members to stone him to death.

Someone might argue that dying is dying and killing is killing. But such a submission will be bereft of legality and logic. So, sir, stop waiting for whether they will come out squeaky clean. Even if they don’t come out clean, the procedure adopted by the SSS is faulty prima facie; please note that I didn’t say illegal, we will come to that.

There are salient and noble reasons why procedures for investigating and punishing erring judicial officers are put in place. And one of the reasons is so that the bench should not be shamed and demystified, for want of a better word. A judge should first be removed as a judge before he should be arrested and made to stand criminal trial.

Once a judge, like every other person, is arrested for a crime, the Constitutional presumption of innocence kicks in, meaning such a judge will most likely be released on bail and he continues to be a judge, presiding over cases, while attending his trial. And most of those cases the judge who was arrested by the DSS, the judge standing trial and prosecuted by the DSS, will be brought and prosecuted by the same prosecutors, the DSS. In other words, his prosecutors will be appearing before him as a judge to prosecute other cases. Can you imagine that?

That is why a procedure is put in place to first remove these erring judges through the instrumentality of the National Judicial Council before they are arrested and prosecuted. It is not because they are better than the rest of us, it is for the sanity of the system.

But what if this faulty procedure leads to an unraveling of heavy corruption… As might already be unfolding? Should will throw away the truth because the procedure was faulty? Is the sting operation even illegal? This is where the truth begin to take the colour of grey. Not white. Not black.

I have already stated in clear language that there is procedure of disciplining erring judges. The National Judicial Council is saddled with this responsibility. This is an admirable procedure for the reasons I gave above. But here I am, perusing the Third Schedule, Part 1, Paragraph 20-22, that establishes and outlines the function and powers of the National Judicial Council and I can’t see anywhere here, where it is expressly stated or remotely implied that because of the existence of the NJC, our law enforcement agents cannot arrest a judge for an alleged crime. If you have seen it, please show me.

The NJC as a body is not even empowered to remove a judge, they only recommend a certain punishment to the executive arm of Government to be meted out to the erring judges. So nothing prevents the executive arm of Government from enforcing the law against judges suspected of committing crimes. “The National Judicial Commission (NJC) is responsible for the appointment, discipline/punishment of judicial officers only in respect of breach of judicial ethics, and not crime. Even where a judicial officer has been sanctioned by the NJC for any misconduct, the state still reserves the right to prosecute the erring officer if his misconduct amounts to a crime.”

A corrupt judge cannot be allowed to hide under the procedural cloud of the NJC to evade arrest. We cannot sacrifice justice and the fight against corruption in the judiciary on the altar of decorum.

The DSS executed their search/arrest warrant as empowered under the Administration of Criminal Justice Act 2015 (ACJA). Section 144 provides for the issuance of search warrant and this warrant may also empower the officer to arrest. Section 148 of the ACJA states clearly “A search warrant may be issued and executed at any time on any day, including a Sunday or Public Holiday.” So those saying it is illegal to arrest them by 1:00 am in the morning are talking out of their imagination and not within the purview of our extant law.

I never thought a day will come when I will see the door of a Supreme Court Justice broken down to effect his arrest. But that day came. But as sad as I am, I will not allow my emotions prevent me from showing us what the law says in this regard. Section 149 (1) of the ACJA states that: “Where any building liable to be search is closed, a person residing in or being in charge of the building, thing or place, shall on demand of the police officer or other person executing the search warrant, allow him free and unhindered access to it and afford all reasonable facilities for its search.” And when unhindered access is denied, what happens?

Go and do a community reading of Sections 9, 10, 12, 13 and 149 (2) of the ACJA and you will see that a law enforcement agent executing a search warrant and/or arrest warrant is empowered to “break open any outer or inner door or window of any house or place” where unhindered access is denied. So if the suspects (judges) denied the agents unhindered access, sad as it is, the hacking down of the door is lawful.

Now to the point of whether the DSS has the statutory responsibility to carry out the raid. A very senior lawyer even claimed that he has read the Act establishing the DSS and nothing therein empowers them to arrest the Judges. Really? Let’s see for ourselves.

Have you forgotten the SSS Instrument 1, promulgated by General Abdulsalam Abubakar? This instrument was promulgated pursuant to the powers conferred on the Head of State by Section 6 of the National Security Agencies Act (the Act that created the DSS). Section 3(1) SSS Instrument 1 states that: “For the purpose of facilitating the discharge of its function under this instrument, personnel of the State Security Service are hereby conferred with the power of Superior Police Officer in respect of searches and arrests”

And before you accuse me of quoting a law made by the military, this instrument has been anointed by section 315 (5)(C) of the 1999 Constitution of Nigeria; and what the Constitution has blessed no man can curse.

Section 12 of Police Act defines a Police Officer to include, “any officer of an equivalent rank in other security agencies” Section 7 of the same Act states unequivocally that, “police officers, custom officers, any member of the Armed forces and Security Agencies can arrest without warrant, any person committing an offence prescribed by law”. So I don’t know where some persons conjured the submission that a DSS operative cannot arrest.

Break down the door if you must but by all means stop corruption on the bench. I am a young lawyer and the law is my life. I burn the midnight candle to be the best for my clients and to get to the apex of this profession but my hard work won’t stand a chance before a corrupt judge who sells justice like oranges.

About the author: First Baba Isa (FBI) is a Legal Practitioner and the President of Lawyers For Peace Initiative; he writes from Abuja @firstbabaisa 07037162029, meandisa@gmail.com