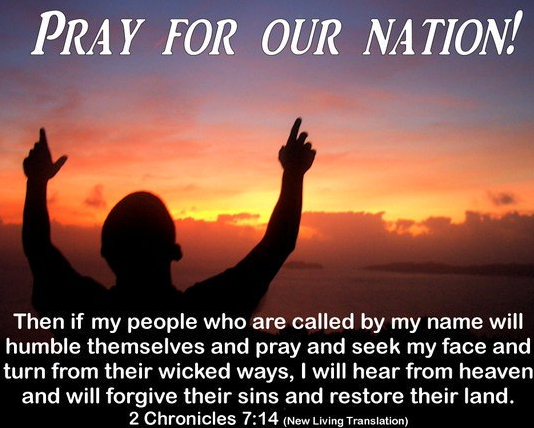 September 26, 2016 – The Christian Church And The State Of The Nation, An Article By Isaac Aluko Ademoroti

It was an inspired King Solomon who said, ‘If My people who are called by My name will humble themselves, and pray and seek My face, and turn from their wicked ways, then I will hear from heaven, and will forgive their sin and heal their land.’(2 Chronicles 7 verse 14) As an oracle of the Almighty, this famous king is here giving us an insight into the workings of God’s mind not only concerning how the Lord sees Himself in relation to His people but also about what should be the responsibilities of His people to their nation.

A few facts immediately emerge as one looks at the above statement. The first is that God readily identifies with His people and shares their hopes concerning their land, that is, their nation. This is for no other reason than that His people are called by His name. Remember, Christians are called by Christ’s name.

Therefore, as Christ would not want His people to be distressed about their nation, He has spelt out what they need to do to ensure the prosperity of their nation. This only means that if God’s people then refuse to play ball, they have only themselves to blame. Secondly, by Divine arrangement, believe it or not, God’s people are supposed to determine what happens in their nation. This is because, according to the instruction given above, if God’s people would endeavour to obey Him, by following His orders, He would heal their land. This implies that it is all in the hands of God’s people and no longer in God’s hands. The last fact that clearly emerges is that, considering the way God operates, the situation in the country may never change.

This is because the quoted statement starts with the operative word if and not the word when. Had the statement started with the word when, one could say that a definite time will come when God’s people will arise from their slumber and do what they need to do to retrieve their nation from the jaws of mismanagement and anarchy. The Almighty however starts the statement with the word if because He knows that His people may never come to their senses and do what is necessary in order to have their nation back.

According to Solomon’s statement, God expects His people to do the following three things so that He too could do what would turn the situation around in their country:

Humility: God wants His people to humble themselves. As it is only God’s grace that has made them to be accepted in the Beloved, Christians need to show genuine love to people from all backgrounds and from all religions. This means that they must never harbour any superiority complex and they should seriously intercede for the souls of non-Christians so that they too can be saved. It is only through love and humility that Nigeria can be won for Christ.

Changing From Wicked Ways: The Almighty also wants His people to change from their wicked ways. These days, one could hardly notice any difference between the way church people live and the way non-Christians live. This is despite the fact that we are supposed to be the light of the world. Without true repentance, we cannot move the nation forward. Many of those who looted public funds are Christians and these people have pastors and bishops who know what they are up to. It is also now not unusual to have a Christian who would have one leg in the church and the other leg in the occult. We only fool ourselves if we think that we can deceive God.

Essentially, as God’s people, we not only need to repent of our evil ways, we also need to repent on behalf of the nation. Prophet Daniel, in the bible, did it for his own nation. It is hardly surprising that Nigeria is better known for her money – guzzling, land – grabbing, cigar – chewing, beer – swilling, and occult – embracing pastors than for righteousness, accountability, probity, compassion and discipline. In addition to those mentioned above, our nation has a lot of other things to repent of namely: The neglect of the widows and the fatherless; indolence; a get rich quick mentality; lack of imagination by the leaders on how to tackle national problems; the shedding of the blood of innocent people; greed and avarice; embracing a culture of corruption; refusal to protect and provide for the weak and the poor; injustice; failure to prepare and plan for the future of our young people whose futures now seem to have been mortgaged and; failure to be good examples to non-Christians.

Praying/Seeking God’s Face: Prayer is power, being an invisible emanation of man’s worshipping spirit. It is the most powerful form of energy that anyone could generate. The Lord specifically commissions His people to pray. Prayer is needed to storm the satanic strongholds scattered all around our country. If we must dislodge the blood – sucking powers that are holding the nation to ransom, then we must spend quality time on our knees. For example, one of the marauding spirits that must be confronted by prayer is the wasting spirit, the spirit that wastes lives, destinies and resources.

The Almighty promises to do the following three things in response to our obedience to His orders:
Hear From Heaven: So far, it appears that most of the prayers being offered are mere noises. Could this be the real reason things seem to be getting worse in our country despite the presence of thousands of churches and ministries? The bible teaches us that God sees the prayers of the unrighteous as an abomination. On the other hand, God has committed Himself to hearing our prayers once we change from our wicked ways as His people.

Forgive Our Sins: The fortunes of the nation will witness a turnaround once our sins, which are many, are forgiven. King David, in the Psalms, wrote about the blessedness of being forgiven. This would nevertheless be after those sins have been acknowledged and confessed.

Heal Our Land: Once our land is healed, she will stop vomiting out her own people. Our agriculture will witness a turnaround as the land will bring forth harvests in her fullness. The land will also stop killing her own children. A land that has opened her mouth to receive the blood of thousands of her own citizens who were unjustly killed surely needs healing.

Continue Reading
You may also like...
Related Topics:state of the nation, the christian church

Engaging The Spirit Of Faith To Fulfill God’s Plan For Your Life Part 2
Today Is Nigeria’s 56th Independence Day! Happy Anniversary To Nigeria & All Her Friends
Advertisement