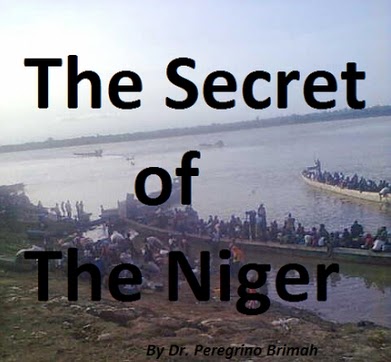 July 5, 2014 – The Secret of the Niger: The Riot and the Visitor By Perry Brimah

Whenever Sule woke early in the morning, he heard daddy reciting the Quran in a most beautiful sing-song tone. Daddy had a golden voice. Was daddy up all night? What time did daddy get up to start this recital? Sule always wondered, but no matter how early he woke before the sun was up, daddy was already there, on the mat, left shoulder propping him, eyes closed, reciting the Quran in such a melancholy, melodious tone, with pitches and falls that sounded like a naturally changing climate. Dad would open his eyes; see Sule and smile, while beckoning to him to come close; wrap his arm around him while never losing his rhythm. It was a feeling like those warm rainy nights when he could hear mom calling his name; only if mom was here.

Dad had built an unshakeable fascination with religion in Sule. His stories were simply amazing. Once he told Sule that he could perform magic. Sule’s eyes were wide open. “Any Muslim can perform magic,” dad had said. “I can move this table here.” “Move it, move it,” Sule had demanded. “No, why do so?” dad responded. “I only use my powers when I absolutely need to. You see so many Muslims have used their powers in the past to do wonderful things, but you do not want to waste the power. Today many use their powers for very bad things.” Sule was left dreaming of this magical power. He wanted to be just like his dad, but he also dreamt of something else, something far off that he couldn’t quite recognize. “You are dreaming again!” His dad jolted him back to reality. “It’s time for makaranta!”

The thirty something boys were reciting at the tops of their voices. Makaranta was a bunch of tattered rubber mats that were moved around to catch the shade under a big tree at a corner of a large compound. Malami sat in front and all the kids formed a half circle around him, sitting on the hard, dusty, stony floor with flattened and torn paper thin mats that barely separated bottom from sand.

Malam trained the students to read in Arabic; they had to learn to read the entire 6236 verses-long Quran. This part of their education took the first two to three years. Then they learned several books of ‘Fiqh’ (the understanding of the Quran and the wisdom of Muslim conduct and societal structure and jurisprudence). This part of the training took a few years and could literally last a life time. There is a ceremony as soon as you first complete reading the entire Quran in Arabic. Sule was excited; he was graduating this stage next week. Hamza was lagging behind. They both started together, but Hamza missed many weeks of school whenever he ran away from home. That could not happen to Sule, because he had the ‘best dad in the world.’

As they recited at the top of their voices, Sule picked a drone in the background. He couldn’t quite make out what it was. Later the other boys noticeably picked it up too. They started getting excited and distracted as the rumble got louder and louder. ‘Thwack!’ was the sound of Malam’s whip cracking on the ground in their midst. “Read!” he commanded. “You want to feel my whip?” Then they saw the first rioter run across the open gate; and then another and several more. It was a riot. “Jihad, Jihad,” the boys running outside were calling out. By now all the boys at makaranta were on their feet. “Go straight home!” Malam ordered. The boys scampered out of the yard. Someone said something about a Christian teacher having touched a Quran or something. They weren’t quite sure what it was about, but who really cared? Most of the boys joined the rioters. “It’s the Jihad,” Sule thought. “The world had come to an end. It’s time to fight for Allah.” Sule remembered his last riot experience – it was quite fun.

They were running to the market place. Boys were setting fires. Everyone picked up a branch. Sule too picked a branch. He wasn’t quite sure what for but he did so. They were waiving down cars. A car almost hit a boy as it sped-by, refusing to stop. Shops were ablaze in the central market. People were making away with market wares. And then things started getting rough. A group of men came to fight off the rioters. Someone fired a shot. Sule was not sure whether he ran or tumbled more as he scuttled his way home.

Alhaji was standing at the door with another tall dark man. There was a grim look on Alhaji’s face. “Where were you, Sule?” he barked. “Did you join the riots?” Sule looked down. “Come inside now, do you want to kill your father! Haven’t I told you never to join the riots?” After some more scolding and stern warnings from his dad and the tall visitor who apparently was Sule’s uncle, Sule was sent off to wash himself and join the two for dinner.

“The problem is who are we?” Sule’s uncle was saying. “What is a nation? Where is our nation? What is a man today? I work every day but barely make a living. I thank Allah for my life– but where is the hope? Where is the pride? Where is the hope for our children? What does the future have for them– are my children going to be Okada riders like me?” Okada riders, was the name given to motorcycle commercial transporters. “But you are making a decent living in Abia, are you not?” Alhaji asked Uncle. “I think it is better for you there than for us here.” “Here and there, there is no future for our kind. The world has frowned on us. We come from a wealthy Kano heritage, but today, we are cobblers, we are garbage men, we are water carriers. We are no more than ‘amenities’ (in the society). Many are content with this life, but I think we need to find who we are. We need to find our national value.” “You think too much,” daddy told him. “Live on the earth as though every day is your last, the noble Prophet taught us. Is that not enough for us?” “But do we not pray to have in this life as well as the next? I do not believe any people should lack opportunity. Our name and even our religion is being soiled by our attitude– and all this violence. This is far from our great history. This should never be so. Our generation has failed to find our destiny; perhaps these younger ones will succeed and find our true place, where we could not. We need to give them the opening. Maybe they will discover the answer, the reason.”

Sule remembered Uncle. He always came to talk to dad about politics and social matters till late into the night. Uncle smiled at Sule. “How are your studies?” he asked. “Fine, uncle,” Sule responded. “Why do you call us Kano people when we are Kanuri?” Sule asked. It had always been on his mind. “We are Kano,” uncle responded. “Your grand father was from Borno, but we are Kano.” He continued. Sule knew not to pry any further. “Perhaps he’ll understand these things later; he sure didn’t now. “Have you told him?” Uncle asked dad. “What?” Sule interjected eagerly. “Your uncle is taking you to Abia,” dad answered. “You are sending me away! No daddy!” Sule ran to hug his dad. “I’m sorry for joining the riots, I will never do it again, please do not send me away, Alhaji.”

“I am not sending you away, my son. I will never send you away. You are all I have left. Your uncle believes you will have better opportunity in Abia. You will learn the English you always wished to learn there. You may even get an education.” Something felt tight in Sule’s chest. The tears started to swell up in his eyes. He never knew his mom and now it felt like he was losing his dad too– and all his friends. He could see in dads resigned eyes that the decision was already made. “After you graduate next week, we will be travelling to Abia together.” His uncle finalized. “You will like it there. You will help with the work and make new friends. You are a man now.” As Sule packed the dishes to wash, it felt like the saddest day of his life.

A little story, a little while, discover the Secret of the Niger. Unedited, from a book in writing.
To be continued…

2 thoughts on “The Secret Of The Niger: The Riot And The Visitor By Perry Brimah”