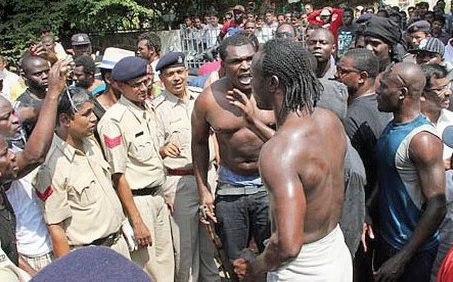 May 15, 2016 – The State Of Racism In India Today: How Nigerians & Africans Are Hated Without A Cause

Racism in India: And “Yannick passed away…” by ‘Lakunle Jaiyesimi

“You’re standing at a zoo, and looking at a caged animal, admiring it, scrutinizing every aspect of it, observing its walk, its skin. Now imagine you’re that caged animal and people are gawking at you like you’re an alien, like you don’t belong. That is how black citizens of African nations say they feel in India, they aren’t caged but they might as well be.” – Sarakshi Rai.

A few days ago in Greater Noida, some Hausa boys were allegedly beaten up by an Indian mob, while the reverse was published in the media (that Indians were beaten up by the Hausa boys). Whereas, the reality was that an Indian boy, with rich but uneducated father, snapped pictures of a Hausa boy and was asked to delete same but would not budge. He called his father and that led to the Hausa boys being attacked. This event led to sabotage on public facilities that fed the Africans (including but not limited to the disruption of power supply); this, ultimately leading to the ejection of Africans, who had to resort to emergent searching for new shelter, with its attendant challenges.

Sometimes, it is a wonder what globalization, in the sense of globetrotting (let’s content ourselves with singly traveling from one’s own country to another’s), may do to one, one’s family and one’s internal peace, when confronted by the dastardly racism that some countries (or some of their citizens) are associated with.

According to The Times of India on July 4, 2014, she received “a cryptic one-line email from Yannick’s father, Nestor Ntibateganya,” from Burundi which “should be enough to shake Punjab’s conscience, “Yannick passed away in the night of 1st July 2014.”
Yannick Nihangaza was a student of Computer Engineering at Lovely Professional University in the Jalandhar district in the state of Punjab, India. Indiatimes reports, “He was the victim of mindless violence, which many felt also had racial overtones. He was attacked in the Defence Colony area of Jalandhar on the night of April 21, 2012 by nine local youths, all in their mid-20s and from well-off families.”

This attack followed an altercation these local youths had “with some African students outside a liquor shop near the bus stand….” They spotted Yannick and attacked him though he had nothing to do with the other group of African students. “The brutal attack had left him with severe head injuries and in coma from which he never recovered.”
Let us take for granted the fact that many Indians travel to other countries for pleasure, work and business especially; this is predicated on Indians expectation that they would be treated fairly and justly wherever they may go around the world. That is to also speculate (with huge index of certainty) that there must be many Indians who believe in multiracial interactions and are therefore hospitable to humans of other colours. However, these exposed and educated ‘sub-species’ must really be few considering the majority others that are not.

The case of Yannick took place in the Punjabi area, where it is believed that most Indians are hospitable. What should be expected in other notorious spots? The cases of discriminations, hurling of racist abuses and outright acts of racism have become so common-placed in parts of India (apology to Indians and parts of India that are largely exempted from this drama) that a synthesis from the potpourri of reported (and unreported) news headlines would make a sweet-smelling sacrifice on the altar of ‘Lucifer-ous’ agents, “India is Racist”. The antithesis to this (as against the hitherto extant thesis) has it that it is not true, as occasioned by the press, the security agents and many Indians who do well as to twist the stories or play them down.

Beyond Yannick, there have been cases of racist violence (too numerous to detail here) including the barbaric assault of a Tanzanian student in Bangalore, within days of which a 26-year-old Nigerian was allegedly beaten up in the upmarket Banjara Hills by a mob.
While the fair-skinned foreigners get treated like VIPs, dark-skinned ones get the treatment of scums of the earth. If the latter reacts, it risks uproar and the subsequent mob action of Indians as reported in the case of the Delhi metro mob action, https://www.ndtv.com/delhi-news/delhi-mob-attack-on-african-students-at-metro-no-arrests-yet-674009. At the police officer’s office, after the students were beaten up, the mob was shouting “Bharat Mata Ki Jai” (Glory to mother India) and “Vande Mataram” (Jai india). Indian Times made a video of what foreign students undego in India titled, “No Country For ‘Black’ Men?”

Personal accounts of two women, “They (Indians) just talk among themselves while looking at you directly and just start laughing.” “I couldn’t even go and eat at the college mess because people would stare and laugh at me.” “The police treats us Africans like dogs,” Sambo Davis, a Nigerian married to an Indian woman who has “tolerant Christians” as parents, says.

Other faces of racism in India include, but not limited to, discrimination in the provision of rental services (with Africans being rejected or having to pay more than their Indian or light-skinned peers). Davis continues, “When they go to rent flats in a normal building they are told – ‘you are a black man, you are Nigerian, and you are not wanted’. This is racism.”

On her own, Mrs Davis is “embarrassed and ashamed” by the behaviour of the Indian people towards black Africans. “When I used to go to a mall or if I walked with him, I always wanted him to hold my hand. But when people saw me with him, they thought I was from a bad family or even a prostitute.” Earlier, she did not understand why black people were being looked down upon, but now she says she does. “Because our society is obsessed with white skin. If I had married a white man, I would have gained more friends and society’s approval too.”

One would have thought (in attempting a rationalisation) that the ill-treatment meted to Nigerians (especially, amongst other dark-skinned persons) must have been due to certain previous and unwholesome acts perpetrated by Nigerians (as claimed, many Indians believe all black women prostitute and that the black men sell drugs and are violent, blah blah blah), in which case, even if true, there might have been a sort of implied justification for been careful (and not, never ever racism as observed) in dealing with such persons (however, logic and evidence may explain why this cannot be). On the other hand, it is known, in many quarters, that Indians are racist with their fellow Indians (with the lighter-skinned Indians considering the darker-skinned as slaves and made to do all the manual labors as brick layers, security guards, cleaners, messengers, drivers and even house maids, yet paid extremely low). It was obvious that the fight for the supremacy of race motivated this attack. It may be significant to mention a pervasive trend amongst the Indians, whose caste system recognizes (though, illegally) discrimination against the dark-skinned Indians, a situation seeing many of the latter using varieties of whitening body creams to avoid the pitfalls of being dark-skinned.

The perception of hatred of Nigerians by many Indians have led to a situation, where many actual criminals, prostitutes and drug dealers claim they are Nigerians when caught whereas they are not. The unsuspecting press rushes to publish such screaming headlines without prior and thorough investigation. This begs caution while interpreting some of the misleading headlines out.

The case of established discriminations in India is nothing new as Benjamin Pratt, a student from Sierra Leone living in India, once told the BBC that many African immigrants are victims of racism and prejudice in India warranting BBC journalists Christian Parkinson and Vikas Pandey to join Benjamin on the streets of Delhi to find out. However, the journey ended up in a small village in the western state of Gujarat, where they discovered a surprising and little-known culture alive and well.

One would have the distracted journey interpreted as a tactical maneuver to circumvent the hideous monster that is Indian’s racism. It should however be noted that the world, Nigeria and many other African countries, have always opened their doors wide to the hospitable habitation of all Indians, who from experience goes to such countries to continue, albeit subtly and with careful calculations, their racist dispositions.

A time may come, as an eventuality, when the people of these countries will have to say no, not any more, to the suffering, the injustices, the prejudice and general ill-treatment of their people while they (the Indians) act like gods in other people’s countries.

14 thoughts on “The State Of Racism In India Today: How Nigerians & Africans Are Hated Without A Cause”