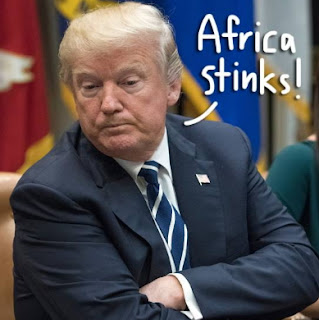 Sunday Feb 25, 2018 – Trump Cannot Change, But Africa Will Change: Why We Must Never Allow His Opinion To Become A Reality

Is it Actually True That Africa Stinks?

Insults don’t tell us who we are; insult tells us where we are. United States President Donald Trump has done it again with his racist tirade connected to a statement he made during an immigration meeting with a bipartisan group of senators, where he described some countries populated by Black and Latino people as “shithole” countries.

It is no longer news that Trump has become so synonymous with insults and derogatory words. He was branded a shocking and shameful racist after it was credibly reported that he described African nations, as well as Haiti and El Salvador as “shitholes.”

He has continued to disparage non-white people since entering the White House, and if his antecedent is anything to go by, he isn’t going to change any soon. Though Trump has come out to deny the “shithole” remark, he didn’t deny the fact that he used tough descriptive words for Africa and Haiti.

Socrates said: “An unexamined life is not worth living.” Anytime I look at the deplorable state of things in Africa, I do get a fierce desire to call Africa and Nigeria in particular by many names. But I really have to restrain myself over the years not to. Gleaning wisdom from William Shakespeare, I will like to say that the fault is in ourselves that we are being treated as underlings.

Someone once said: “When you learn how much you are worth, you will stop giving people discounts.” We live in a country where cows are treated as first class citizens. A country where herdsmen kill innocent citizens for the love of cows, where there is no sanctity of life, where the hordes of hell have gone on sabbatical, simply because we are our own demons.

The African mind is a damaged mind and needs re-orientation. Look at the state of our roads, airports, hospitals and the epileptic state of power (electricity). The other day, the First Lady of Nigeria, Mrs. Aisha Buhari, complained bitterly about the state of things at the Presidential Villa hospital called the State House Clinic.

We are in dire need of true leaders in Africa. What we have presently are leaders that are actually part of the problems. I have often said that leaders that cannot solve problems are liabilities. Our leaders gave Trump the tools for his insults. We should see Trump’s vituperation as a call for development, emancipation and self-assessment, instead of putting ourselves in our default and usual self-defensive mode. Trump’s outburst is not a verdict; it is a wake-up call.

I have come a long way with his bickering and nuances, never to look at his insults, but to actually confirm the veracity of his claims and the provocative truth in his message. His speech should actually provoke us into changing the status quo. Instead of rage, let us change.

I am not disputing the fact that his claim and comparison is an insult, but can we justify the reason why Africa does not deserve the insult? What better name can we call a continent that has been be-devilled with classical and digitalised corruption; a continent where impunity has become commonplace?

What can we say of a sitting governor in Nigeria that erected a gigantic statue of immediate past South African President, Jacob Zuma, worth millions of naira in his state when the same Zuma was shamefully forced to resign because of high level corruption cases against him in his home country. It is appalling to know that Zuma fell in South Africa, but he is still standing in Nigeria

Eleanor Roosevelt once said: “No man can make you inferior without your own consent.” Every citizen must come to the realisation that they can never be treated more than the value that foreigners put on their nation. Many times, Nigerians in the Diaspora are treated badly. It is no news again the gory tale of what Nigerians went through in Libya, where Nigerians were auctioned and sold for a paltry of $100. If we are tired of being treated like a doormat, then we should get off the floor.

We begin to lose sanity in life when we get to a juncture where we prefer to be comforted with a lie than to be hurt with the truth. Our system is so full of crap that it will be so difficult not to pass it for a shithole. It is either our ignorance of the state of things in the country has become encyclopedic, or our denial has obliterated our sense of reasoning.

I remember vividly when I was younger, when we could just branch across the roadside after school to take public tap water. Today, you look along the roadside and this social amenity has gone into oblivion. The children of nowadays grew up only with bottled water.

Former US President Barack Obama once said: “Change will not come if we wait for some other person or some other time. We are the ones we’ve been waiting for. We are the change that we seek.” Africans must be the change that they wish to see in the continent. It is either we suffer the pain of change or suffer remaining the way we are. The greatest threat to the African continent is the belief that someone else will save it. Africans must take ownership of their future.

Don’t ever allow people to judge and pass demeaning verdict on you just because you don’t have what they possess. We must stop acting in manners and ways in which the world continues to see us as liabilities. We must remove the elitist myth and imperial cliché that Africa cannot farewell without western interventions. Our history should rather point us towards a better future. It must never be our destiny. We must collectively insulate ourselves from modern form of bullying, which is intimidating people into believing that they are lesser beings, just because they are different from us.

Pa S.G. Elton, a British missionary that God sent to Nigeria in 1937 with a clear prophetic calling and mandate to raise a new leadership for the church, who lived in Ilesha, Osun State(South western Nigeria), for about 50 years, said in the 1980s about Nigeria before returning: “Nigeria and Nigerians will be known all over the world for corruption. Your name, Nigeria, will stink for corruption, but after a while, a new phase will come, a phase of righteousness. People from other nations of the earth will hold to a Nigerian and say, we want to follow you to your nation to learn righteousness.” Elton spoke glowingly about the two key nations in Africa, Nigeria and South Africa, saying that Africa is like a gun pointed down. Its turret and muzzle is South Africa, its trigger is Nigeria.

The late boxing legend, Muhammad Ali, once said: “If they can make penicillin out of moldy bread, then they can sure make something out of you.” The insult is not the insult; our attitude to the insult is the insult. Our value does not decrease based on someone’s inability to see our worth. We are in dire need of people that can see clearly, the present state of things in the nation and proffer solution.

If we desire to avoid insult, we must be able to repel it. We must stop the growing abuse of victimhood, erosion of human society and decline of individual responsibility. We must not allow Trump’s opinion of Africa to become our reality. We must stop getting offended at Trump’s continuous tantrums and random insults on Africa. Instead of focusing on his ranting on Africa, let us take it as a clarion call for a new Africa. Trump cannot change, but Africa will change.

“Insults don’t tell us who we are; insult tells us where we are!”~ Gbenga Adebambo

Continue Reading
You may also like...
Related Topics:africa, opinion, trump

Nothing Can Stop A Man With The Right Character From Achieving His Goal
15 Life Lessons From Black Panther Movie: We Are Our Own Rescue!!!