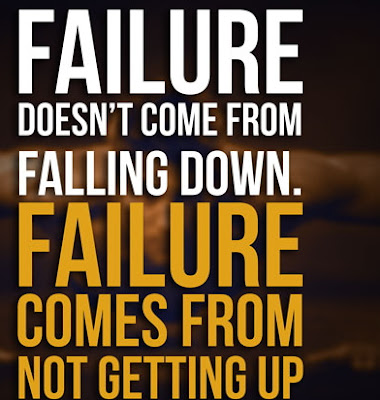 Oct 28, 2016 – How To Pick Yourself Back Up After Failure Or Temporary Set Back  – Tony Ogunlowo

How To Be The World’s Greatest Comeback Kid

“…When you’re going through Hell, keep on going! Never, never never give up…” ~ Winston Churchill

By some cruel twist of fate you’ve lost it all – everything! The house, the job, the wife, the kids, the cash – everything’s gone!

Or you haven’t lost all the aforementioned (-yet) and you’re spiralling downwards rapidly and things aren’t working out in your life; debts are piling up, business is going under and you’re pulling you’re hair out in frustration at your inability to control your predicament.

Normally when you’ve fallen from a great height and suddenly find yourself face down in the gutter you can only do one of the following three things:

1, Take the easy way out – find a tree and hang yourself, take an overdose or jump off the nearest high rise. Suicide is not always the best way out; you create untold hardship and misery for those you leave behind and it’s not good for the soul either.

2, You can lose the plot altogether, go insane and wait to be carted off to the nearest psychiatric ward of the nearest mental hospital or …..

3,…or you can decide to be a comeback kid!

A comeback kid is a person who repeatedly demonstrates the ability to overcome downturns or bad periods and bounce back – imagine a boxer knocked out on the canvas, seconds away from being counted out, when he suddenly leaps up and wins the bout.

History is full of people who have infamously fallen flat on their back sides, lost everything, and miraculously picked themselves up. Some famous ‘comeback kids’ include:

1) Robert Downey, Jr, battled substance abuse and legal problems that saw him jailed in the 90s. Today, he’s cleaned himself up and is one of the highest paid actors in Hollywood now.

2) Donald Trump – The Republican Presidential candidate has survived four cases of bankruptcy and managed to bounce back.

3)  The late Steve Jobs was fired from Apple, the company he started, in 1985 before coming back to rescue it in 1997 and turning it into a mega-success.

4) Actor/Comedian Steve Harley went from being homeless to being worth over $100 million dollars.

5) Martha Stewart – Americas first self-made billionaire who nearly lost it all when she was sent to prison for conspiracy, bounced back regained control of her company and has since taken it to new heights.

6) George Foreman – the boxer- reportedly squandered his $5 million fortune earned from fighting and was close to bankruptcy when he climbed back into the ring at the age of 45 in 1994. He has since lent his name to the Foreman grill and is currently worth over $250 million.

Just because you’re down doesn’t mean you’re out of the race; get up, dust yourself down and continue. Others have fallen much further than you have and still managed to get up.

In my book ‘Bootcamp for the Troubled Mind’ (to be published on the 13 June 2017) I list six ways to get yourself out of the gutter and back on top again:

1) Self-Analysis – you need to be brutally honest with yourself here. Look yourself in the mirror and try and see where you went wrong. Don’t blame anybody else for your shortcomings (- even if others are responsible for your downfall!) – Spreading the blame will never solve your problems.

2) Get ready to live an austere life – while you’re picking yourself up you have to limit yourself to just the basics in life – food and shelter. Anything else becomes a luxury you can’t afford! Don’t waste resources!

6) Reward yourself – each time you reach a certain milestone in your comeback-fight treat yourself to something – call it a pat on the back for good behaviour. It could be a mini-holiday, a new car or a watch – but don’t go over the top ‘cause there’s still lots of work to do

To borrow a story from the Bible Jesus once said ‘destroy this temple and in three days I will raise it up again’. The Jews he was talking to replied by saying’ this temple took forty-six years to build…and you’re going to raise it up(brick by brick) in three days?’. But of course Jesus was talking about the temple of his body and his resurrection (- which is a story for another day!)

But you can apply this same principle to your lives! If your life has been torn down build it up again – brick by brick!

From a ‘Comeback Kids’ point of view if his temple, that took forty-six years to build, is torn down he’ll preserve and build it all up again in record time – maybe not in three days – but he’ll build it up.

In our material world whatever you have lost can be rebuilt or re-acquired in record time. All you need is the will to do it, the strength to work hard and the belief that it can be done. And like a phoenix you’ll rise from the ashes and be great again.

Where there is a will there’s a way.

Don’t Worry Things Will Get Better: 10 Uplifting Quotes To Get You Up When Things Get Tough
Knowing God’s Plan For Your Life Part 2 – Oyedepo