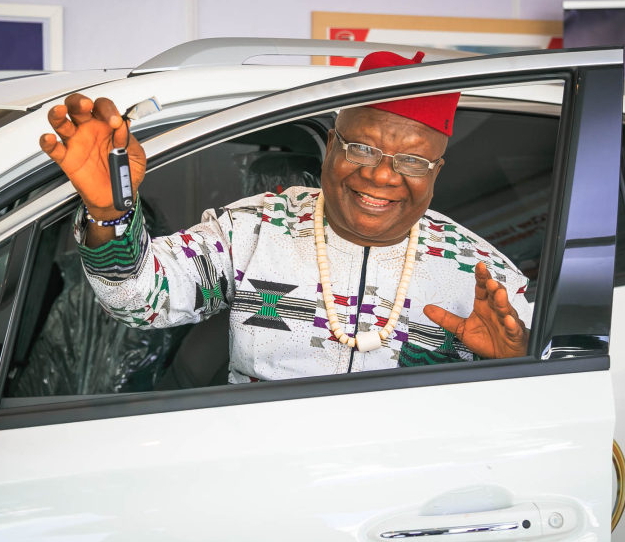 Wednesday March 8, 2017- Veteran Actor Chief Zebrudaya: I Have Never Received A Car Gift Like This Before

Nigerian actor Chika Okpala, of The New Masquerade fame has stated that he has never been gifted with a car on stage before a live audience all through his career.

Popularly known as Chief Zebrudaya, the actor was reacting to his recent victory at the recently held Africa Magic Viewers Choice Awards where he was presented with an Industry Merit Award.

The thespian, who revealed that he has owned cars, but is usually given privately, showed his excitement when he was given the dummy keys of a brand new Sports Utility Vehicle, SUV.

“I have never been given a car like this,” he said in his acceptance speech. Okpala who expressed surprise at receiving the award, made a joke about the Member of the Order of the Niger, MON, national award he received from the Nigerian government, saying; “It was M.O.N without the E-Y.’’

He also advised up and coming actor to also give in their best in whatever they are doing, as it usually pays off at the end.

“When I was given the production of New Masquerade, which ran for like 15years, I gave it all my best, even when it was not an easy task,” he said.

Accompanied by Nkem Owoh, known as Osuofia who stood at a distance, ‘Zebrudaya’, acknowledging the comic actor, revealing that he was part of the production of New Masquerade, the sitcom that that ruled the Nigerian airwaves in the 80s and mid 90s.[The Nation]