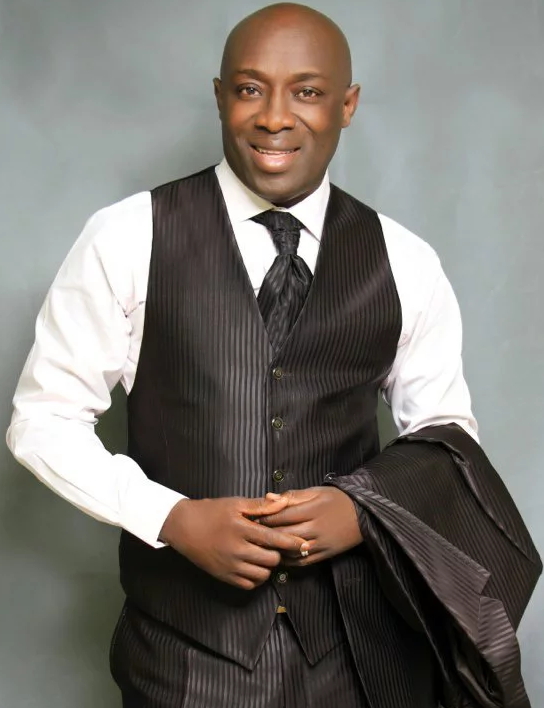 Few days back, Fuji star Adewale Ayuba and his wife visited the City of David Parish of the Redeemed Christian Church of God in Lagos where he came out to testify of how he became a born again Christian.

Watch the video below and see transcript after

He began by saying Good Morning Church. My name is Dr. Adewale Ayuba, from last week I have been feeling somehow. I realise that the Holy Spirit told me to go out and say something, and give testimony to people that can listen.

I started this with my driver in the car. For no reason, I just told him, Saheed! God has done this and this for me I became born again Christian. 2010, before this, I had a lot of Alfas, when I was still a practising Muslim, they come to pray for me at the end of the day, after 2 hours of hot prayers, immediately they leave my home, I will go upstairs and carry the Bible as if that prayer they have prayed God was not going to answer it, I will pick a Bible to sanctify the prayer. I have been doing this for many years. My wife has been saying wambi, why are you doing this to yourself? Why are you scared? She knew that I was scared then, all along to turn around and say I am a Christian now, I might get killed because I have been to Hajj and in my album I mentioned Muslim prayers people think I am a Muslim but in me I am not a Muslim. I knew but because of the kind of genre of music I chose to do, Fuji, the orientation of it is from Muslim background. I thought if I say I have become a Christian I am not going to live for 10 days.

Something kept telling me Wale I chose you…I gave you your talent, I am the only one that can hide you from evil. One day, I called the Alfas in my house, we are all serving the same God. Anobi Yisa is Jesus Christ. Abraham is Ibrahim. Moses is Musa, I have chosen Moses and I have chosen Jesus Christ. And the head of Alfas in my house said is that what you want to do? I said yes. But they said you gave all your children Moslem names.

How do you want to do it? I said that is what I want to do. For the first time I am not supposed to say this. I am telling you now that all my children have been going to church.

The one that really surprised me happened 3 days ago. I got a loan from one bank. I was here on the 31st of December. I told my Lord that before the end of January, I want to repay the loan. I made the payment last week. I have a lot more to say. I thank God for his mercy.

That one didn’t go down too well with some Muslems who are angry that Ayuba dumped his Islamic faith and a lot of threats have come his way which made him respond last week in a statement he made on Youtube.

My name is Adewale Ayuba. I have been receiving a lot of calls particularly about my testimony that I gave in my church at City of David last Sunday, I realized a lot of people have been taking it out of context I might get killed. I didn’t mean what people are saying now, what I meant was the kind of love people have for me, how are they going to take it. So this is the problem I have been facing.

Am sorry if I have hurt anybody by this speech, I never called any Muslim a killer and my parents are Muslim and I have a beautiful Muslim family and fans, who have been with me from day one of my career.

I can never call you a killer, I love you all and may God bless all of us, we all live by one God.