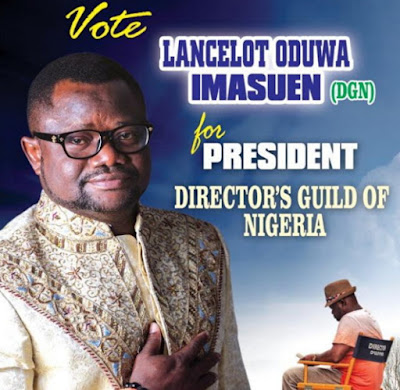 The award-winning Nollywood director is calling for support as he plans to run as the National President of the Directors Guild of Nigeria (DGN).

Mr Imasuen is calling on all fans to vote him as the next President of the Guilds on February 26th 2016.

“Dear Friends May I wholeheartedly inform you of my sincere desire to serve this country and Nollywood as the National President of the Directors Guild of Nigeria ,though the election which comes up on the 26th of February is strictly a DGN members affair but I am using this medium to seek and ask for your Prayers, support in all ways possible,Judging from the past and present I see myself as most capable and competent to steer the ship of. The Directors in Nigeria because Film Directing has been my Life and God has been merciful unto me,… You cannot give what you do not Have…please it’s with all humility that I once again Ask for your support…Lancelot oduwa imasuen DGN”