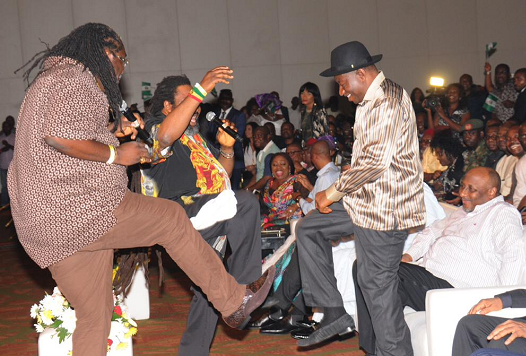 Sequel to the initial N3bn Project ACT-Nollywood grant given movie practitioners by the Federal Government, the sector can expect further boom, should President Goodluck Jonathan-led administration be voted back into power.

That was the situation when in what was largely a campaign move, the president held an interactive session with stakeholders in the showbiz sector on Sunday, at the Eko Hotel, Lagos.

Hosted by Richard Mofe-Damijo, the event tagged ‘The Showbiz Interactive’ had President Jonathan dialogue with entertainment stakeholders on the way forward.

Fielding a question on whether the Federal Government intends to add more fund to the N3bn sovereign fund to the entertainment industry, Jonathan responded: “Definitely, if we must make the industry big, and of course, I’ve seen the potential in it. We’re talking about contributing 1.45 per cent to the GDP. Before, it was zero. So, we know there are potentials in the industry. The first three billion (Naira) was experimental. Now, we feel that it is quite successful. But, surely, we’ll do better.”

During the session, the issue of piracy and how the government could curb it came up. And a vocal voice amongst those who preferred that rather than dole out money to practitioners, government should put in a place, structure where artistes could benefit from their works, was foremost comedian, Ali Baba.

According to the comedian, while piracy is a big issue, the absence of a proper distribution channel was a greater problem.

“What we need is a proper structure that can make us earn money from the films we put in the market,” he told the President. “The question I want to ask you now, I’m asking on behalf of Amaka Igwe. And she has asked this question in this forum before when you talked with us the last time. We asked this same question here: How are we going to deal with pirates so that we can put our products in the market and make money from it? Because if you give us five billion dollars to put a product out in the market, as soon as it is in the market and the pirates get one, it is over.”

However, a flustered Jonathan could not promise a potent formula to combatting piracy.

Responding, Jonathan, who views the entertainment industry as ‘a unifying factor’ just like sports, said: “In terms of combating the piracy which is just like armed robbery… armed robbers are being shot but people are still committing robbery.

Advocating the “continuance of security efforts,” the president said, “it will be difficult to say we have a magic wand to wave to wipe out piracy but we can continue to suppress it and make other avenues of showing the films.

“We need the private sector to get involved,” Jonathan said. “This time around, luckily, with your support, I’m going to win election and immediately we get back… we’ll set a small technical committee to strengthen the department of government and we’ll continue to fight it (piracy) until we reduce it to the barest minimal. At the same time, we’re exploiting other opportunities that could enhance the earnings of creative artistes.”

Other people who asked questions at the parley include actor Adeniyi Johnson and former president of Performing Musicians Association of Nigeria (PMAN), T-Mac Omatsola.

Despite romancing players in the entertainment industry, all has not been well with the sector which has been bedevilled by piracy and absence of proper distribution framework.

“In the last thirty years, record companies and labels have gone under, what plans do you have to save the music industry because of piracy?” asked T-Mac.

Accepting this situation poses a problem to the artiste, society and the government, Jonathan could, however, only offer a feeble way out.

“If people must be in the industry and be creative, then, definitely, they should benefit,” Jonathan said.

“While we have the copyright commission and other institutions that is supposed to control it, I think the criminals are always trying to beat us. We would work together. I promised the industry before this time that we would strengthen our laws in the first place… First of all, we have to review the laws to make sure that the sanctions are commensurate to their offences. The punishments are quite light and we must take it very seriously.”

Nigerian entertainment industry has seen tumultuous times, especially with the activities of pirates. However, not much success has been realised in tackling the menace.

Continue Reading
You may also like...
Related Topics:jonathan, nollywood