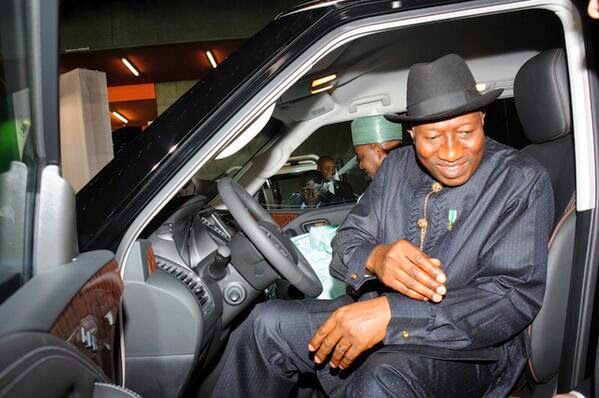 Who Stoned Nigeria’s President, Mr. Goodluck Jonathan? Should the 14th February presidential elections be postponed? These two questions, as with the following and many more questions Nigerians have been clamoring to address for the last six years, all have the same single and urgent answer—President Goodluck Ebele Jonathan must be retired immediately!

It could be Buhari’s supporters, or it could be paid thugs hired by the ruling PDP to pretend as opposition maniacs in order to subvert the character of the chief opposition candidate. We do not know who it was because the state security department under the Goodluck Jonathan administration is hopeless, helpless, clueless and dangerously derailed. Otherwise they would have, and we would have trusted them to arrest the perpetrators of this violence, investigate them and indict whoever is responsible. But this will never happen now or later as long as we and the evil people among us live “free” of justice as Jonathan promises in his campaigns.

The National Security adviser, Sambo Dasuki proposed to the BBC that Nigerias elections should be postponed because the INEC has been unable to distribute half of the nation’s permanent voters cards. Again Nigerians are held to ransom by an inebriated, mischievous administration that lacks the capacity to fulfill the barest requirements of its citizenry. The independent electoral commission, under the Goodluck Jonathan administration had four years to prepare for this election. This “F9” performance is not an issue for extension but an issue for dismissal.

The same answer can be found for all the pressing problems that the nation is crippled under—INSECURITY; ethnic violence; poverty; the missing billions of dollars; the Baga massacre; national immigration employment scam; the looting of the aviation ministry; the Malabu scandal; the failure to arrest a single sponsor of terror; the oil subsidy scam; kerosene subsidy scam; the dwindling foreign reserves; the devaluation of the naira; the lack of economic shock absorbers; escalating oil looting in the Niger delta; increasing oil pollution; insecurity in the south-south and south-east which has made it impossible for Nigerians abroad to go home, and an endless list of catastrophic issues that we are all too well aware of. The answer to all these questions is the same thing—President Goodluck Jonathan must step down immediately.

As we discuss the upcoming elections, Boko Haram has displayed a perturbing massive stockpile arsenal that it claims to have obtained in its easy victory over the sabotaged and undermined Nigerian military at the Baga multinational barracks. Jonathan government’s direct failure has been credited with the massacre of Baga and the deaths of our soldiers and civilians.

Hundreds of guns (displayed in “Shekau’s” latest video), armored tanks and personnel carriers and the best communications equipment in the north were captured by the terrorists according to sources within the military.

The already deadly terrorist sect that easily overruns Nigerian military formations and just massacred over 2500 defenseless Nigerian civilians is getting ready to accelerate its vicious full scale annihilation pogrom of the people of Nigeria’s northeast.

Before the Baga massacre, we warned of the urgency and severity of this already out-of-hand terror crisis and the urgent need for Nigeria’s infantile, mucked up, insensitive, callous and directionless government to be immediately relinquished of its hold of the nation’s affairs. We warned that there was no time till February and worse yet till May. The worst terror event of the decade happened in Nigeria while we delayed.

It’s time for protests, it is time for the senate and house of assembly to step up at last; it is time for the United Nations; it is time for God to answer our prayers and for man in and out of Nigeria to act. It is time for Jonathan to go! President Jonathan must go now. Whoever in any part of the country or world wants him as their leader and keep him. We reject continuing to live under F9-failure; we demand our right to life and dignity.

Jonathan has tasted what we taste and worse versions of every day. He was only pelted with stones, water bags and shoes; we are shot with bullets, rocket propelled grenades and bombed to bits daily! How dare he ask for the security he has failed to provide us for the past six years? No one is to blame for the security he wishes to exist in the terrorized parts of Nigeria he visits, than the commander in chief of the nation. He now understands our daily experience and he now needs to resign or be resigned.

#JonathanMustGo! And now! Not in May, not in February, Jonathan must go now!

[By Dr. Peregrino Brimah; [Every Nigerian Do Something] Email: drbrimah@ends.ng Twitter: @EveryNigerian you]

Continue Reading
You may also like...
Related Topics:jonathan, president, stoned