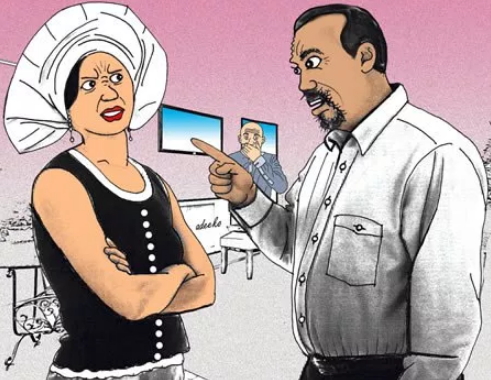 Feb 4, 2018 – Why Many Women Are Living In Bondages They Call Marriages

Stop Praying For Husbands With Bad Attitude, Your Marriage Is Not Under Spiritual Attack

When I hear some women lament about the kind of treatment they endure because they want to keep their marriages, I weep silently. The way they tell their tales of marital woes, one would think they will receive a crown for enduring so much suffering after death.

I wonder if this was what God had in mind when he ordained marriage. I keep asking myself if marriage was supposed to be a prison or slave camp because many Nigerian women are living in bondages they call marriages.

As a child, I listened as women lamented about being treated like doormats by their wicked husbands. I saw despair on their tired faces as they continued to put up with abuse, neglect and irresponsibility of these men who paraded themselves like tin gods.

Anytime these women gathered, it was to complain and whine about their husbands. They would take turns to narrate their horrible marital experiences to their friends. It was as if they were competing with one another in the bad marriage ministry.

I would shake my head at their stories. Even as a child, I knew it was wrong to live that way. I knew that being a woman doesn’t mean being another person’s doormat. I knew that wasn’t the kind of marriage I wanted for myself.

The funny thing was that anytime pointed out that things were not supposed to be so in marriages, it would earn me some knocks on the head. I would be schooled about the need for women to be submissive to their husbands.

In my head, I would be like, “So, why are you people complaining all the time about how you are treated by your heartless husbands if you all refuse to demand to be treated with respect?”

After a while, I finally came to the conclusion that many Nigerian women love to suffer. That’s the only explanation I can give for them choosing to settle for abuse and humiliation all in the name of keeping their marriages.

You don’t keep a marriage by yourself. You don’t fight alone because you are not married to yourself. If you are the only one fighting to keep your marriage while husband man is busy treating you like trash, you will age faster than your mates.

You will be looking 60 at 40 while bobo will be catching his groove with peperempes at your expense. You will end up living a sad and unfulfilled life. This will also take a toll on your mental and emotional health.

When I was a teenager, there was this woman who attended the same church with us and became close to my mum. She was beautiful, hardworking and kind.

She visited us a lot and with gifts too. She was a good, generous woman and very beautiful too. In fact, you would call her an angel. But she was always complaining about her husband. She always complained about his lack of care and affection.

She told everyone who cared to listen that she was suffering in her marriage. She would complain, whine, complain some more but continued allowing her selfish husband hurt her. She was the breadwinner but this man didn’t appreciate her efforts.

The man runs a business but his family doesn’t see money to spend. He spends it on side chicks, cream, soaps and perfumes. This wife doesn’t even know the difference between a perfume and a body spray and she dare not touch his soap or perfumes for any reason. It would earn her a beating.

He claims he’s the head of his house hold and his wife can’t demand that he takes care of her and their children. He kept demanding for big chunks of meat and choicest chicken parts anytime she serves him food. You can imagine the effrontery and insensitivity of this selfish man.

This woman was making kunu, zobo and all kinds of snacks just to make sure her four children saw food to eat, have clothes to wear and attended school. Husband man doesn’t know the school his children attended. He doesn’t know how their school fees are paid, how they feed or wear new clothes.

Anytime they told him they needed something, he directed them to their mother. He tells them that it’s her duty to see to their welfare. He tells them not to disturb him. He was just concerned about taking care of himself and his babes. He was looking younger every year while madam virtuous woman lost her youth, her strength and her beauty all in the name of keeping her marriage.

Sometimes, I wonder why she kept calling him her husband because as far as I was concerned, his presence in her life was useless. He wasn’t adding any value to her life. He was draining her emotionally and psychologically. She became sick because of the stress but he didn’t care.

And the annoying part was that anytime she complained about her husband treating her badly, she was told in church to pray more and submit to him more. She was reminded that the devil was after her marriage and her husband’s attitude was a spiritual attack.

But the more she prayed; the worse things got. This man didn’t change. He just stepped up his game. He graduated to stealing her money. Even though she submitted more and prayed fervently, husband man continued to run after young girls, married women and widows.

He spent his money on them while his wife crumbled under the weight of taking care of him and their children all by herself. She continued to endure his abuse because church people told her the man was not in his right senses.

The last time I saw her, she was looking like his mother and the guy was still fresh enough for peperempes to grab. He didn’t care to hide his many affairs. He threw it in her face. I cried when I got home. She was looking like a beggar. We exchanged pleasantries and parted ways.

My mum later told me that, six years ago, he relocated to the East with one of his mistresses abandoning his wife and children in Lagos. He said he was a free man who needed to live his life to the fullest. His family also supported him. They told his wife to leave him alone to enjoy his life when she complained to them about his behaviour.

You know the funny thing? This woman accepted this annoying living arrangement. I heard she travels to the East to see him and have sex with him. She still believes she’s a married woman and the devil is fighting her marriage.

One time, she fought with one of his mistresses and I was speechless. As long as I could tell, she was never in a marriage to begin with. She has been alone for long. When will women stop using marriage to irresponsible men to measure their worth?.