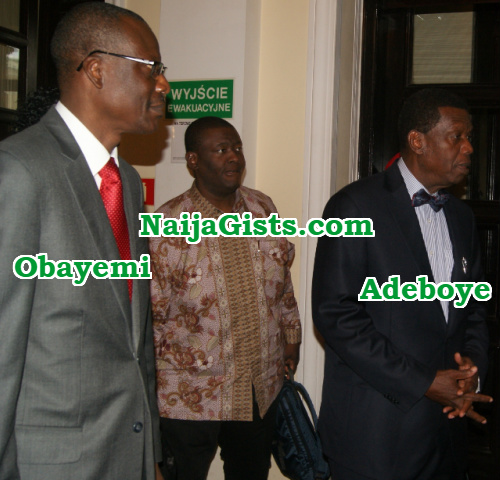 Members of RCCG were looking forward to the usual annual Thanksgiving Service with the General Overseer (GO), Pastor Enoch Adejare Adeboye on Saturday but they were shocked when the GO announced a new leadership for the fastest growing church in the country.

The announcement coincided with prophesy of surprises listed by Adeboye in his annual prophesy released on December 31, 2016, while he urged members to join any political party of their choice in order to have a stake in the selection of leaders across the country.

The don-turned cleric told the members at the ultra-modern 3kmX3km auditorium located at Shimawa in Ogun State that the announcement of the new GO for Nigeria became necessary following government’s directives to all religious bodies to appoint leadership on a tenure basis.

The news was received with shock by the members but their fears was allayed when Adeboye said that he remains the GO (Worldwide) for the church which has presence in over 192 countries in the world.

He added that new GO – Obayemi will oversee the Nigerian arm of the church, adding that, “this will also affect other General Overseers including David Oyedepo of Living Faith Church aka Winners’Chapel; Kumuyi of Deeper Life; Daniel Olukoya of Mountain of Fire Ministries, among others.”

He described the new GO as an experienced administrator who has been prepared for years by God for the task.

According to him, Obayemi has been part of the mission’s Salary Review Committee as well as member of the church’s In-Land Mission and has also represented RCCG at Pentecostal Fellowship of Nigeria (PFN) and Christian Association of Nigeria (CAN) activities across the country.

The new secretary – Odesola is an Assistant General Overseer and the pastor in charge of the Church’s Headquarter in Ebute Metta, Lagos.

Adeboye charged the members to join political parties of their choice as this would afford them the opportunity to be part of the selection of leaders.

“I want to urge all of you to join any political party of your choice so that you can be part of those that will select leaders. You must start from your ward where you can be a delegate to be able to choose leaders,” he said.

He also announced the commencement of the annual fasting and prayer of the church which he said would last for 40 days starting from January 11 to February 19 across the globe.