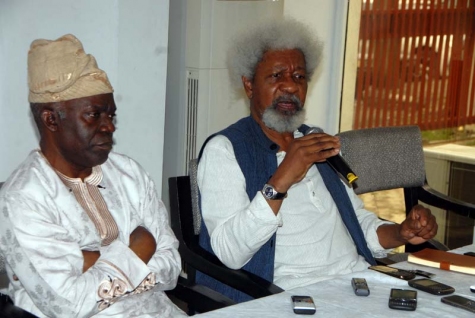 Kongi yesterday came after Jonathan during a conference that held at the freedom park in Lagos.

Prof Soyinka urges Nigerians to not vote for the continuation of Jonathan’s government because he is a total failure in leadership.

“I will not vote and I will not encourage anyone to vote for the continuation of this government, simply because your colleagues numbering over two hundred were kidnapped, “

“And the government of this nation failed to show leadership. So anyone who says after that event that I will vote or cast my vote or encourage anyone to vote for this regime must be living in Sambisa forest,” Soyinka said, referring to a forest in Borno State where the Chibok girls are believed to be held by Boko Haram.

“There has been a failure of leadership. Our children whom you represent today have been betrayed ,” Soyinka said, adding that no appropriate action was taken to rescue them.

Soyinka said it took the Jonathan government ten days to even accept that the Chibok girls were missing.

“After that dereliction of duty, after that failure of leadership, after that betrayal for our future, for anyone to think or to put words in my mouth suggesting that I will vote or encourage anyone to vote for this regime is a travesty of intelligence,” – Soyinka told students at the 2015 edition of Vision of the Child (VOTC), a yearly programme inaugurated in 2012.

The professor also debunked his death rumour at the event.

Continue Reading
You may also like...
Related Topics:jonathan, Nigerians, Soyinka