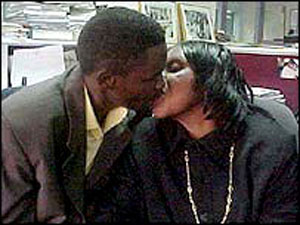 August 30, 2013 – Woman To Marry Her Own Son In Zimbabwe; Mother Pregnant With Son’s Child

Betty Mbereko, a 40-year-old widow who has been living under the same roof with her own son, 23-year-old Farai Mbereko is set to marry him.

The mother and son who are madly in love with each other plan to take their romance to a new level considering they’re expecting a child together.

Betty from Mwenezi in Maswingo who is now 6-month-pregnant for her son confirms that she has decided to marry him because she does not want to marry her late husband’s younger brothers, whom she says are coveting her.

Betty stunned a village court last week when she said the affair with her son had begun three years earlier.

She said after spending a lot of money sending Farai to school following the death of her husband, she felt she had a right to his money and no other woman was entitled to it.

What is going on in this world.

68 thoughts on “Woman To Marry Her Own Son In Zimbabwe; Mother Pregnant With Son’s Baby”