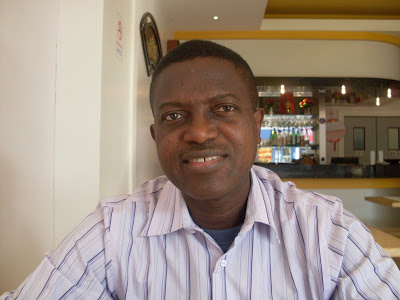 July 11, 2016 – Yola Remains The Most Beautiful City In Nigeria Even After Boko Haram Attacks – Wale Okediran

I returned to Yola on a May afternoon after a seven-year absence. On hand to receive me to the ‘Land of Beauty’ was a midday soft sun that peeked out of the azure blue sky bathing the tarmac of the Yola International Airport with a golden hue. It had been raining as evidenced by the wet fuselage of the Medview Aircraft that had brought us from Abuja as well as the puddles of water on the ‘terra firma’. This explained the very clement weather that wafted all around as I drove into Jimeta whose original name ‘Jinta’ am told, actually means ‘I have received the blessings of this land with my two hands’.

Seven years is a long time but I could still remember some of the land marks despite the much improved road network and several billboards with the screaming slogan; ‘Bindow Means Business’. From the airport located in the Damily Community in Jimeta I moved on to Yola South where the Roundabout with the beautiful Fulani Milk Gourd still stands as it did during my last visit. As we entered Yola North, a newly constructed city gate with the boldly written sign ‘‘Welcome To Yola’ welcomed us to the administrative capital of Adamawa State where HE Governor Bindo Umaru Jibrilla’s office is located. The Governor I was told had just left for the neighbouring Cameroun on an official visit.

Unlike my last visit which was limited to Yola metropolis, on this visit, I will be touching the three Senatorial Districts of the State viz, Adamawa North, Central and South as part of my job as a Health Consultant. After checking in to the much improved American University of Nigeria’s Hotel and Conference Centre at 228 Modibbo Adama Way, I headed to the hotel’s Club House which I had also visited during my last trip.

As I waited for dinner to be served by the swimming pool side, I watched as a father put his two young daughters through the rudiments of swimming at the shallow end of the pool. Meanwhile at the deep end, two lover birds who appeared to be experts were showing off their aquatic expertise to the motley crowd of diners and onlookers. After a leisurely dinner of barbecued spiced chicken and rice, I watched the finals of the European League Championship between Serville and Liverpool in a match where the French side triumphed. Drugged with fatigue and the sumptuous meal, I soon made my way to my room for the night’s rest.

‘’In that case, we need to move very fast’’ was the response of my guide and driver when I informed him of my desire to go up North to Gombi, Hong, Mararaba, Mubi and Malagali Local Government Areas and return to Yola same day. ‘’It is not because of the distance. The problem is the road. It is in a very bad condition’’ my guide added.

It was lovely as we moved past farmlands with busy farmers and grazing cattle both working and moving side by side without disturbing each other. From the farmlands the scenery changed to palm tree dotted mountainous peaks as we moved further north in the direction of the Cameroonian border. Mango trees and baskets of mangoes could be seen all over the place as the road side sellers tried to make a bargain.

We soon entered a massive valley surrounded by a lovely ring of craggy mountains, beautiful date palms and more mango trees. Unfortunately, at that point, the hitherto good road took a turn for the worse. ‘’This is Hong’’ my guide mournfully intoned as I gazed with disbelief at the bad road where giant potholes almost the size of motor cars made driving a nightmare. All around us were bombed out shells and bullet pocked buildings including banks and churches which I was told were tell -tale signs of the dreaded Boko Haram insurgency.

As we progressed, the vegetation soon turned to rocky outcrops and mountains with dry vegetation and shrubs. These were interspersed with mud walled and thatched villages. Once in a while we chanced upon dry river beds, a sign of a long dry season anticipatory of the rainy season which was yet to begin in that part of the state.

At Mararaba, we took the left road that led to Mubi and decided to abandon our initial plan of going right on to Malagali because of the late hour. ‘’Malagali abuts parts of Borno State where the Boko Haram insurgents are still active’’ said my guide when I expressed my sadness at the thought of not visiting Malagali.

We stopped for a lunch of semolina, draw soup and fish at Song, a drowsy and dusty small town a few kilometres outside Mubi.

As we approached Mubi, several security check points manned by gun totting and serious looking soldiers slowed down our movement. The soldiers were assisted by members of the local vigilantes in their maroon colour uniforms holding their own guns. And despite the bad roads, there was an on-going afforestation project where thousands of ‘Gedu’ and ‘Dongoyaro’ trees were being planted to combat the menace of forest encroachment.

Just before entering Mubi town, we chanced upon the Mubi Army Barracks which am told was attacked by the Boko Haram insurgents sometimes last year.The barracks still had an artificially made barrier of a moat all around the facility. After the barracks, were sprawling cattle markets on both sides of the road. 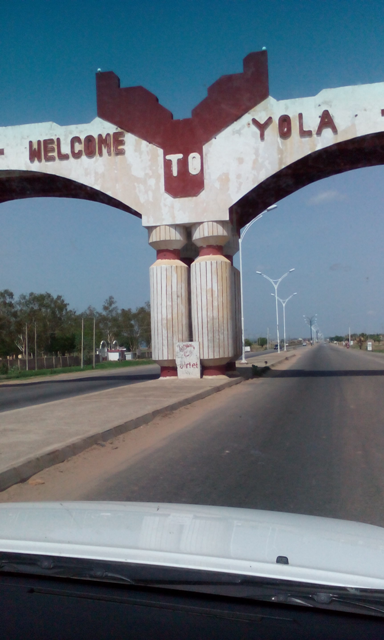 We were soon welcomed into Mubi town by more Bill boards of ‘Bindow Means Business’. ‘’Governor Bindow is from Mubi’’ was my guide’s response when I expressed my surprise at the large number of ‘Bindow’ Bill boards in the town. Mubi is a very big commercial nerve centre which am told, continues to be a very important international market serving Nigeria, Cameroun and Chad Republic.At the town’s Tike Junction, was another sad reminder of the Boko Haram insurgency in the form of the remnants of a bombed ECOBANK building, an incident which am told took place last year where the insurgents were able to cart away millions of Naira from the bank’s vault.

Twilight was setting when we finally departed Mubi by way of Maiha where we had some meetings. It was on our way back to Yola that we gave a soldier who was going for a one week home leave in Lagos a lift. The soldier, a tall shy looking guy who gave his rank as Corporal explained that he was going on leave after a long time in the bush. He assured us that the Nigerian Army had badly decimated the Boko Haram insurgents to the extent that their remnants occasionally come out of the bush to beg for food from the soldiers.

The following day took me on a tour of Adamawa Central with visits to Fufure, Yola South and Yola North where the town of Janbutu is located. Being mostly in the Yola metropolis, this region was well developed and largely urban. It is instructive to note that while the Yola South is the traditional headquarters of Adamawa where the palace of the Lamido of Adamawa is sited, Yola North is the Administrative capital where the Governor resides.

My last tour of Adamawa was to the Southern part of Adamawa state with visits to Demsa, Mayobelwa, Bamtato, Numan and Lafiya in Lamurde Local Government Area which abuts Gombe State.

In Numan, I chanced upon the Savanah Sugar Plantation said to be owned by Dangote Sugar Plantation. Located on both sides of the very rough and almost impassable Yola /Gombe Road, the massive enterprise, extends into the horizon as far as the eyes could see.

After Numan, we crossed the big bridge on the wide belly of a tributary of River Benue which was now largely dry as an evidence of an on-going drought in that part of the state. And as we crossed the river, I could see far below, children swimming in a muddy pool of water which was all that remained of the wide river. And due to security checks, there was a traffic snarl on the road into Lafiya in Lamurde Local Government Area whose hard craggy terrain reminded me of parts of the Simi Valley in California, USA.

As I rounded up my visit to Yola and by extension parts of Adamawa State, I remembered to reconnect with some of my old friends in the state. These include Alhaji Ahmed Jarma, the MD of Adama Beverages, makers of the well -known Faro water, Abba Tahir of the American University of Nigeria and Rev Dr Thiliza whom I have worked with on a number of health related projects. Of course, I did not leave out the current Deputy Governor of the State, HE Martin Babale who was my colleague in the House Of Representatives in Abuja a few years back. On the day of my visit to the Deputy Governor’s office in the Gwodabawo ward in Yola North, I met the whole place in darkness as the electricity had been disconnected due to the then on-going Nigerian Labour Congress induced strike over the sudden increase in the price of petrol.

On my last day in Yola, I asked my friend Abba Tahir a staff of the American University of Nigeria Yola to take me on a tour of the 11 year old institution. Although I had visited the University during my last visit to Yola, I was impressed with the development I saw in the University since my last visit. Apart from the new e-Library which I was told had 99.5% of electronic books, I also saw the 4000- seat well equipped Commencement Hall which also doubles as the University’s Indoor Sports Hall. With a student population of 1000 students from 37 countries, the University has an average population of 25 students per class (some are as low as 5 students per class) When I marvelled at the large expanse of University land, Abba informed me that the University has a total of 1000 hectares of land, some acquired and some donated by the host community. At the time of my visit, the University was hosting the National Conference of the Association Of University Librarians in its ultra- modern e –Library.

As I later departed for the airport on my way out of Yola, I took another long look at my favourite landmark, the statue of the Fulani Milk Gourd and hoped that it will still be there when I return for another visit to the ‘Land of Beauty’