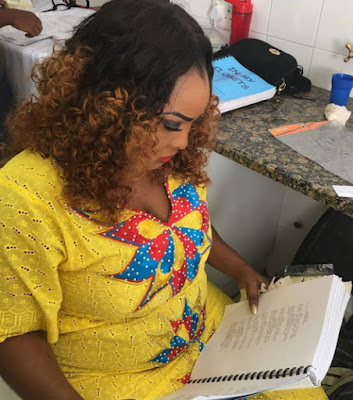 The actress who is currently working on a new English movie recently got a not-so-kind comment from a fan who felt she lacks the ability to speak fluent English because of her background in Yoruba movies.

Read what Ronke said via her official IG page;

“A few days ago, i had to respond to a fan who insinuated an intimidation between English and Yoruba Actors because i posted a video clip from an English sitcom i’m currently shooting.

Now, she believed that because i chose to do yoruba movies, then i can’t speak English. I know the reaction i have gotten when i go for an interview and the interviewer feels i can’t be exposed enough…. just because i do Yoruba movies. E ma gba mi ke.. lol

My response to the lady was simple…. Acting has nothing to do with your language… its about your ability to give life to a scripted character… This transcends language… We have seen a British Actor (Idris Elba) play Mandela with the right accent.

We have seen American Actors play a Russian character and deliver well with the right accent. The language you speak doesn’t determine your acting capacity. Acting is a beautiful profession… Can we just enjoy the act and stop criticizing so much.”

Be the judge, watch the actress speak English below