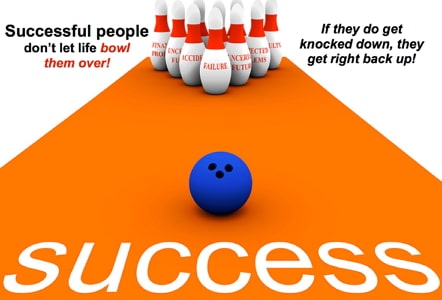 Regret is simply something you wish you knew earlier in life! Tallulah Bankhead said, “If I had my life to live over again, I’d make the same mistakes, only sooner”.

THE GREATEST HINDRANCE TO SUCCESS IS NOT FAILURE BUT THE PREVIOUS SUCCESS:

Our previous success can hinder us from moving to the next level when we become so full of them. Don’t build your future on your previous successes, rather let them give you more impetus to be more successful.

EDUCATION WITHOUT THE DISCOVERY OF YOUR GIFT WON’T TAKE YOU FAR IN LIFE: Your education is not your secret to wealth and fulfilment; the discovery of your gift is. The core purpose of the education should be discovering one’s gift as early as possible. Any education that does not teach us to discover, nurture and develop our gifting and uniqueness is a waste. There is no man that is as poor and miserable as the one that carries all his gifts, talents and potentials to the grave. Real wealth is discovering your gifts and talents, and making the world a better place through it.

REJECTION IS OFTEN REDIRECTION: Sometimes, the greatest thing that will ever happen to some of us is rejection! The reason has been that most times, rejection is simply redirection. When people continually reject you, it is because God is redirecting you. One of the core secrets of great people is in their ability to handle and overcome rejection without harboring any form of bitterness. Don’t ever give in to people’s rejection, rather ask God to redirect you to your place of destiny fulfilment. Alexander Graham Bell said, “When one door closes, another opens; but we often look so long and so regretfully upon the closed door that we do not see the one which has opened for us”.God sometimes allow men to reject us so that we don’t settle for less than what he has for us, because those that settle for less don’t get the best out of life. Whether in relationships or career,we must have a healthy approach to rejection which is to see it as redirection.

YOUR VALUE DOES NOT DECREASE BASED ON SOMEONE’S INABILITY TO SEE YOUR WORTH:I have often said that when you learn how much you are worth, you will stop giving people discounts! Tim Fargo, “If you want to improve your self-worth, stop giving other people the calculator.”We must believe totally that we carry within us a special form of “currency” that cannot be devalued.In order to maintain a healthy self-image, there are three things that must be vehemently resisted in life: “Don’t ever look down on yourself”, “Don’t ever allow anyone to look down on you”, and “Don’t ever look down on anyone”.Nobody, I repeat, nobody can make you inferior without your own consent. An internal security will always produce an outward stability.

BE YOURSELF, EVERYONE ELSE IS ALREADY TAKEN: Myles Munroe once said,“Most people don’t know who they are, so they die as someone else”.The privilege of a lifetime is being who you are. Until you live a life that is truly yours, you have not lived! Many people live a larger part of their life wanting to be someone else. For all the time you work hard to being someone else, they are wasted years.

STOP ASKING FOR PERMISSION: If you live on people’s acceptance, you will die from their rejection! Madonna Ciccone said, “Poor is the man whose pleasures depend on the permission of another.” I have observed that the greatest hindrance to living a fulfilling life is being ‘stucked’ on other people’s opinion and permission. There are two things that we can perpetually live on: ‘Permission’ or ‘Conviction’. Great people live on the latter while the former is meant for lesser souls. Live on conviction and stop asking for permission. Make no apologies for following your heart; a man on a mission needs no permission.

MAKING MISTAKES IS AN INTEGRAL PART OF SUCCESS:Tony Robbins said, “No matter how many mistakes you make. You’re still way ahead of everyone who isn’t trying”. In life, the fellow who never makes a mistake takes his order from the one who does! Anyone who has never made a mistake has never tried anything new.When we were in school, the smartest people are always those that don’t make mistakes in class. I’m sure you remember them, they always get the good grades and sometimes even 100%! As time goes on, you suddenly realize that the real smart people are actually those that make enough mistakes and learn from them. Mistakes are integral part of the learning process. Any learning process that does not accommodate making mistakes will always short-circuit the learners’ capacity for innovation. Abraham Lincoln said, “The man who is incapable of making mistakes is incapable of anything”.

THE WORLD OWES YOU NOTHING: The worst form of mentality to carry around is ‘entitlement mentality’. Next to it is ‘Victim’s mentality’. All you will ever get from life are the things that you demand from it. No one will give you what you deserve! You are the only one that can create the life that you want. The worst thing that can happen to you as a young person is to refuse to grow up. You refuse to grow up when you believe that someone else must take responsibility for your life and life circumstances. John Wooden said, “You can make mistakes, but you aren’t a failure until you start blaming others for those mistakes”.

FAILURE IS FEEDBACK:The only thing worse than failure is our wrong approach to it. Our approach to failure will determine how long we stay in it. The acclaimed father of modern automobile, Henry Ford forgot to put a reverse gear in his first car! It was a massive error for a car that was much awaited by many. When Henry Ford was asked to say something about his global blunder, he ended up redefining the erroneous interpretation of failure. He said, “Failure is simply an opportunity to begin again, this time more intelligently”.  Many people fail continuously simply because they do not learn from the previous failure. Nelson Mandela once said, “I never lose. I either win or learn”. Don’t see failure as setback, see failure as feedback!

THERE IS NOTHING THAT IS READY MADE:There is nothing that is ready-made. All that you need has been given, the challenge is just that they might not be in the form that you need it. The reason why there is scarcity in your life is not because you don’t have what you need, it is simply because what you need is in a form that you are too lazy to work upon! The liberating truth against scarcity is to believe that you already have what you need, but not necessarily in the form that you needed it. You need to work on what you have presently in order to get what you need out of life. Nobody gets the best out of life automatically; the best comes as we work on the good that we have presently. Truth is, no relationship is perfect. We can, however, make our relationship more fulfilling and exciting. A good relationship requires effort, hard work and dedication from both partners. The wife or husband that you want does not exist; you may need to work on the lady or man in your life presently in order to get what you want.

VALUE FAMILY AND RELATIONSHIPS MORE THAN MONEY: Family is everything; you must never sacrifice family for business. Those that succeed at home will eventually employ those that struggle at home. Walt Disney said, “A man should never neglect his family for business”. I have come a long way in life to realize that the only resources that is inexhaustible in life is relationship. This doesn’t suggest that we shouldn’t make money, but rather we must not prioritize it above relationship.

“I failed in some subjects in exam, but my friend passed in all. Now he is an engineer in Microsoft and I am the owner of Microsoft”- Bill Gates

Ten People You Must Never Give-Up On!
Teachers Don’t Only Teach Children To Count, They Teach Them What Counts!