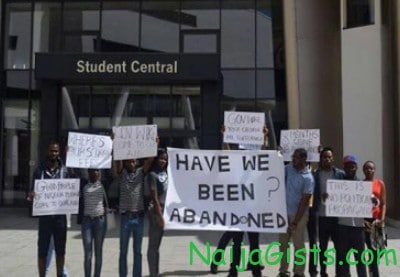 The gleam has gone out of the light of 16 Rivers indigenes studying medicine at the All Saints University in Saint Vincent and Grenadines. The 16 students who are beneficiaries of the Rivers State Sustainable Development Agency Scholarship (RSSDA) scheme were suspended from medical school two months to their graduation as a result of the inability of the Rivers state government to pay outstanding tuition fees and living allowance running into thousands of dollars. An invoice for an individual student obtained by The Nation pegged the tuition fee for 5 semesters at $39,975.

In an online petition uploaded on www.change.org, the 16 stranded students pleaded with Governor Nyesom Wike to pay their upkeep allowance and tuition, which was last paid in November 2014.

“We have not been paid our upkeep allowance for about 2 years and 11 months. Our tuition fees have not been paid for 5 semesters (Clinical rotation [CR2 to CR6]), and as a result of this, all 16 of us were suspended from school in September, 2016 (2 months to our scheduled graduation date of November 2016).

“Ever since our suspension, we have been staying at home, not being allowed to conclude our remaining elective clinical rotations and all efforts to contact the Rivers State Government for the release of funds proved abortive,” the students wrote.

“Feeding has been very difficult as we rely on the charities of friends and school colleagues. Most landlords have evicted us from their houses due to non-payment of rent and threatened us with legal proceedings in order to recover the outstanding rent. Life has been tough and unbearable for all of us since we were abandoned by the Rivers State Government and RSSDA”, he lamented.

In a letter dated July 16, 2016 addressed to Dr Terace Marcelle, the Dean of Students Affairs, All Saints University, Saint Vincent and the Grenadines; the Rivers State Sustainable Development Agency had written to the school pleading for understanding whilst also intimating the school management of some changes to the scheme.

“The point that needs to be emphasized here is that we will only sponsor students that are completing their studies in 2016 as well as settle outstanding commitment to date.

“Kindly be assured that the outstanding tuition payment for our students in your school have been adequately captured in the list of payables that are on the front burners of the Rivers state government. We will plead strongly with you to continue to show understanding and to kindly allow a little more grace and period specifically for the 16 final year students who also fall in the category of students that the Government has pledged to continue their sponsorship”, the letter, signed by Mr Lawrence Pepple, the Executive Director/CEO of the RSSDA read.

Charged with the development of human capital and agriculture resources in the state, the RSSDA was inaugurated as an agency under the ministry of agriculture and natural resources in 2008 by the Rotimi Amaechi administration. The former governor introduced the overseas scholarship scheme in critical areas such as Medicine and allied courses, to deserving indigenes, after an aptitude test, where qualified candidates were selected and prepared for academic programmes in A-level and/or international degree foundation. Admissions were secured in universities overseas for successful candidates by RSSDA, which entered into a bilateral agreement with students and their host institutions.

Usually, the living and tuition allowance of the students were paid in advance but problem began when the former Commissioner for Agriculture, Onemin Jack, in December 2015, informed parents of children under the RSSDA overseas scholarship programme that only final-year students would complete their programmes abroad, with the rest to continue their studies in Nigeria.

Finding revealed that not only did the agency reneged on the agreement to see the final year students through the scheme, governor Nyeson Wike who spoke during a recent interview aired on channels TV claimed the RSSDA overseas scholarship beneficiaries were not Rivers State indigenes. He also added that the beneficiaries are children of his political opponents.

When The Nation sought the reaction of the SSG to the Rivers state governor, Mr Kenneth Kobini, he directed the reporter to ask the former governor, Rotimi Amaechi;

“You are from The Nation newspaper. Have you asked the former APC zonal leader who was governor who refused to pay the fees of these students’ children since 2014? When you ask him you can come to us and ask us what we are doing,” he hurriedly stated and hung the call.

The students refuted the claims of being children of political opponents in the state. “We have no political affiliations, we are just young people trying to better our lives and become productive members of society.”

Apart from the 16 RSSDA sponsored final year medical students are stranded at the All Saints University, St. Vincent Grenadines, there are also other final year stranded students in fields such as engineering, Law, Science, ICT, etc scattered in various schools in India, Europe, Canada, UK and the Caribbean. Last month, parents of stranded final year medical students in the University of Debrecen in Hungary pleaded with governor Wike to show compassion on their helpless children by fulfilling his promise by enabling the students obtain their certificates and return to Nigeria.

Also, the petition was started one month ago by Udochukwu Amadi on www.change.org with the title “ R/State Govt: Please pay the tuition fee of 16 final year RSSDA medical students in the Caribbean” has been circulating online. The petition targets the executive governor of River as well as some stakeholders including the speaker of the Rivers State House of Assembly, Rt Hon Ikuinyi Ibani, Minister for Foreign Affairs, Mr Geoffrey Onyema, Rivers Commissioner of Education, Prof Kainye Ebeku amongst others.

Derefaka David Direh, a Rivers indigene in the United Kingdom who signed the petition, said: “I am signing this because it is a painful experience to start a programme and not conclude it. Apart from the feeling of failure, it is demoralising for these young ones to have to waste so many years of their lives in foreign lands. A commitment made by one government should be a liability or responsibility of the new government. Not only should the 16 final year students be catered for, others who were awardees on the programme should be apologized to and compensated for the suffering and humiliation they have been put through as a result of non- commitment on the part of Rivers state. Is it stressed or traumatized doctors that we want to produce?”

Another respondent Owhorchukwu Anwuri who was a past beneficiary of the RSSDA scholarship believes the students who have put much effort in their studies should get what they are entitled to. “It is wicked to leave these sons and daughters of Rivers state in limbo, they deserve better,” he intoned.

Rivers State Commissioner for Information, Barr Emma Okah, in a phone interview, explained that the state experienced an economic downturn which affected revenue generation and as such, government decided that for courses that can be easily pursued in Nigeria, there would be no need to pay for tuition in foreign universities.

“For those who are in final year pursing specialised courses like medicine, the state government planned to pursue their welfare to the extent it can take. Some people have been coming and cases have been dealt with on merit. I do not know what has happened to these set of students. I am just hearing it for the first time today,” the commissioner stated.

He said the 16 students were not abandoned on the assumption that they are children of political opponents.

As Wike works towards the infrastructural development in the state with an enthusiasm that has earned him the toga “Mr Project”, it is only hoped that he reconsiders his stance on the stranded medical students by rescuing them from an abyss of despondency.