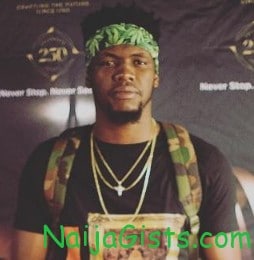 Friends and family of 23 year old Olugbemiga Abiodun bid goodbye to the young man yesterday in Banana Island amidst tears and showers of rain.

The remains of the deceased were conveyed into the Olaniwun Ajayi Gardens in a black Cadillac Escalade, followed by family members who were still in shock over the sudden death.

Among his friends present to pay him their last respects were popstar, Davido, his manager, Asa Asika, Special Spesh and a host of others, who gathered in groups possibly quietly recollecting the last moments they had with their late friend.

Until his untimely death last week Saturday, DJ Olu worked with his oil mogul father, Dapo Abiodun. His lifeless body was found in a BMW sedan in the parking lot of the flat he lived in the highbrow Banana Island area of Lagos. He and his friend Chime Amaechi who would be buried tomorrow, died in the car after a night out. As at press time, police had yet to release information regarding the double death.

Continue Reading
You may also like...
Related Topics:burial, dj, Olu