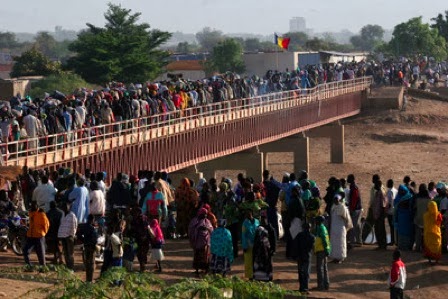 A recent study carried out by the United Nations High Commission for Refugees (UNHCR) revealed that no fewer than 36, 000 people have fled their homes in the North-eastern Nigerian states of Borno, Yobe and Adamawa to seek refuge in neighbouring nations, on account of the Boko Haram insurgency.

According to Ms. Angele Dikongue-Atangana, the UNHCR Representative to Nigeria and ECOWAS, while about 19,000 of the 36,000 refugees are Chadians and Nigeriens who have been forced to return home, the remaining 17,000 are bonafide Nigerians who are now seeking asylum in neighbouring Cameroun, Chad and Niger. This is a scary wake-up call to Nigeria to find a quick solution to the insurgency that is forcing our compatriots into refugee camps in surrounding countries.

Incidentally, these three countries into which the fleeing Nigerians have flocked, have over the years had many of their citizens seeking refuge and better lives in Nigeria. In essence, they do not have the capacity to accommodate the influx of such a large number of refugees from Nigeria or any other country. As a matter of fact, none of our neighbouring countries has the capacity to handle the kind of refugee situation that could arise from any serious breakdown of law and order in Nigeria. Although Dikongue-Atangana said the UNHCR “is working in collaboration with these countries to ensure that the refugee situation of the asylum seekers is determined, so as to guarantee their safety”, not too much can be expected from these countries.

It is disheartening that Nigerians now have to resort to seeking asylum in less endowed countries like Cameroun, Chad and Niger. This is more so because, out of about 1,800 refugees in Nigeria as at the end of last month, 865 were Cameroonians. Until now, Nigeria had provided a safe haven for refugees from other African countries, notably Liberia, Sierra Leone, Mali, Chad, Niger, Sudan, Cote d’Ivoire and Congo. Our porous borders have made it easy for those fleeing from unemployment, hunger and starvation in neighbouring countries to cross into Nigeria without any form of documentation. All these are outside the fact that Nigeria had to formally integrate over 1,200 of the last batch of Liberian refugees into the local Nigerian com,munities they were resident, while about 1,700 of them opted to return to Liberia.

We are now faced with a situation in which citizens of our Big Brother nation, Nigeria, are now running to countries that are just managing to survive, because of Islamist insurgents! We have always raised the alarm on the need to do everything possible to avert any cataclysmic situation that could lead to a serious refugee situation in Nigeria.

Although Nigeria is the fourth largest West African country, in terms of landmass, its over 160 million population is more than the population of the rest of West Africa put together. This means that the entire West Africa, put together, cannot absorb the refugees that would be thrown up by any serious crisis in Nigeria.

The quest of 17,000 displaced Nigerians for asylum in neighbouring countries, on account of insecurity, is bad for Nigeria’s image. The Federal Government should step up its campaigns for an end to insurgency, and the restoration of peace in northern Nigeria, to stem the trend. It is not enough to deploy soldiers to major towns and cities in the troubled areas, leaving the rural areas largely unprotected.

Much as we do not delude ourselves that the war against Boko Haram can be won overnight, the time has come to rethink the current approach to the war, as the mindless killings have yet to abate.

According to the UNHCR, the world is facing its worst refugee crises in 20 years, as war and all manner of conflicts are forcing people to flee their homes. The organisation noted that “the humanitarian situation in West Africa has worsened notably due to insecurity and high unemployment rate, as well as drought.”

With the bulk of those displaced in various West African countries looking up to Nigeria for succour and stability, it is almost unthinkable that Nigeria would now be the one spewing out tens of thousands of refugees. The consequences for the country, and the region at large, are better imagined than experienced. That is the more reason why we must do everything possible to arrest the nation’s security challenge.

While we commend the Federal Government for the deployment of more soldiers and the extension of the emergency imposed on the most affected states, we call for the strengthening of intelligence in the war against Boko Haram. The government must also spare a thought for, and provide succour, for our vulnerable citizens who have either been displaced internally, or are now seeking asylum in nearby countries. This is a responsibility that we must not shirk or leave to UNHCR and our neighbouring countries.