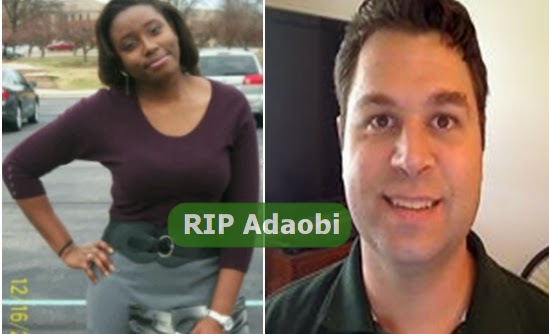 Police in Columbus Indiana are still trying to unravel the mystery behind the murder of a Nigerian woman identified as Adaobi Michaella Obih.

The 26-year-old lady was found with throat slit and multiple knife wounds on Tuesday the 19th of November 2013 at her apartment in Columbus Indiana.

The person of interest in Adaobi’s murder is her neighbour, a 36-year-old man named Ryan Allen Klug.

Since Adaobi’s murder, Ryan has disappeared into thin air.

According to sources, the victim was a PHD student and the first born of her family.

Ryan A. Klug, 36, of 3461 Limestone Lane, Apt. 2134, is the prime suspect in the death of his roommate, Adaobi M. Obih, who suffered multiple knife wounds, according to a probable-cause affidavit.

Obih’s boyfriend, Jude Osara, last communicated with her on Sunday afternoon, and then was unable to get text-message replies after that time, the affidavit said.

The woman’s throat was cut, the charging document said, and blood-saturated clothes the same size as Klug wears were found in their two-bedroom apartment.

A warrant for Klug’s arrest was signed earlier today, and Columbus police have reason to believe he may be in Ohio.

I never knew you, never met you, never even spoke to you. However, I knew something of you. My friend Alexis always spoke of you. I have known Alexis for over 6 years close to 7 really and all she ever did was talk about her amazing sister- Adaobi. It was obvious she loved you and shared a strong bond with you. It was always her sister this and that. It was impossible to know Alexis without knowing about her sister.  You were definitely a huge part of her life and her joy. she always talked with excitement about anything happening in your life. she was always proud of you and eager to show you off. I never had to meet you to know that you were an amazing elder sister to my friend and daughter to your parents. I never had to meet you to know that know that you were an inspiration to your sister. When she shared the happiness you brought her with us, you indirectly brought happiness to us. You were a true blessing indeed. Your life was not in vain for you brought smiles and joy (directly and indirectly) to the hearts of many.

Words will never be enough to explain how much you will be missed. I share my friend’s grief at your death. However, the life you lived will be celebrated and the memories you left behind forever cherished!