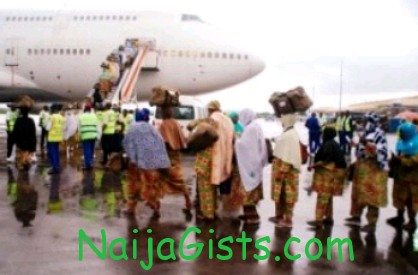 After the Federal Government 24 hours’ ultimatum to Saudi authorities to release the 400 Nigerian female pilgrims detained in the country, another 171 pilgrims from Taraba and Katsina States were yesterday sent back from the country.

It was gathered that the Max Air, one of the national carriers, had to turn back with 171 female pilgrims from Medina after the Saudis denied them entry into the country on the excuse that none of them was accompanied by their husbands or approved male partners. As at Wednesday night, Saudi authorities were still threatening to deport the pilgrims, who were from Jigawa and Sokoto States.

All the intending pilgrims were disappointed when the aircraft landed in Malam Aminu Kano International Airport at 4.58pm local time.

A visibly angry woman identified as Aisha Ismail lamented that it was a sad and painful experience: “it was a horrible experience from friendly quarters.”

She said: “We were quarantined in a prison-like camp: no food, no water, and with few conveniences to cater for hundreds of my unfortunate type in the camp.

“The trek into uncertainties began four days ago when we left Yola International Airport for the pilgrimage. My joy evaporated after the airport screening, when hundreds of us were denied entry into the kingdom and subsequently driven into an open camp.

“We spent three days in the camp, kept under the watchful eyes of no-nonsense security agents that did not understand our dialect and we do not understand theirs. We were dehumanised by Saudi Arabian authorities for no reasons.”

Dailypost gathered that Katsina State has the largest number of deportees with a total of 111, and Taraba State with 60 female pilgrims.

Meanwhile, the Senate President, David Mark said efforts must be made to ensure that the pilgrims were released and allowed to perform hajj. “Saudi is a member of SHOORA. (Source: Daily Post)