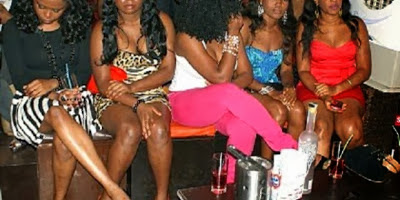 If lesbians had until now, escaped the limelight, it is probably because the society was unaware of their function. You would be utterly appalled to find out that your star celebrity with the stunning natural black hair and a beautiful face with a flawless complexion is a lesbian.

Before now, when confronted by the news that two beautiful women were sleeping with each other, the ordinary man would think the information did not just compute.

It is a different story today. Not even the Black Africa has been spared the bug of this rather unholy act.

In Lagos, though this was not the first discovery of such, a nest has been uncovered where young ladies allegedly engage in the same-sex affair. If you think it is ungodly for adults to engage in sexual behaviour that tends to inflict a distorted lifestyle on kids, you would wish to even avoid to discuss the merits, if there is any.

Houses of Sodom, that’s what they call the havens where ladies are engaged in lesbianism in Lagos, have been discovered in the past with little or no results achieved to curb the menace. Some four years ago, the Lagos State Government unleashed its task force men on some lesbianism dens located within the Ikeja metropolis but then some top officials of the agency were petitioned against by patrons of such dens who have the ears of the power corridors, pushing the cheering efforts to a seemingly permanent end.

Our latest findings have revealed that two of such dens are still operating in full capacity at Ogba and Iju/Ifako Ijaiye areas of Lagos. An insider source revealed to our reporter how known faces in the Nigerian movie industry, Nollywood, visit the places, for God-knows missions, including female children of the rich.

Their desire to relocate from the upscale Ikeja was said to have been encouraged by the fact that the new hideouts being a suburb would keep their activities away from the searching eyes of the security agencies. Of course, the ones in Ikeja still function but not at the full capacity as they used to be and patrons are gradually finding their way to the new places outside the commercial centre.

Girls that are involved are said to be highly enlightened, most of them graduates who lack honest ways to live.