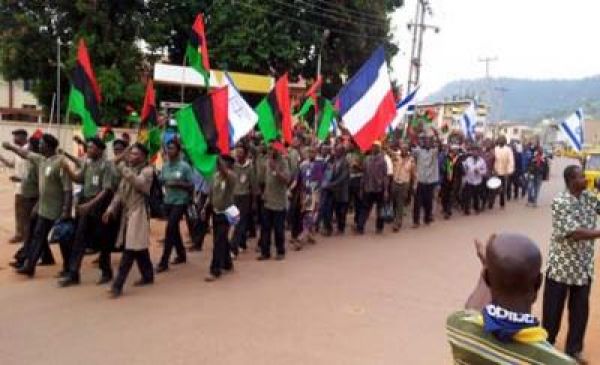 At least two members of the Movement for the Actualisation of the Sovereign State of Biafra (MASSOB) were feared killed and over 100 others arrested yesterday in the commercial city of Onitsha, Anambra State when MASSOB members clashed with security operatives dur­ing activities marking the 16th anniversary of the group.

The thanksgiving services which held in all the states of the South East during the weekend, also led to the arrest of scores of MASSOB members in Aba and Nnewi, according to Daily Sun reports.

The group’s coordinator for Anambra North zone, Emman­uel Omenka, told Daily Sun on phone that the clash took place during the thanksgiving mass held at St. Lwanga Catholic Church, Okpoko, New Haven in Ogbaru Local Government Area. According to him, a joint security task force had invaded the venue and arrested about 200 members.

Omenka alleged that the joint security task force used brute force on them and told them point blank that they were carry­ing out the Federal Government directive on the clampdown on the group.

Also in Nnewi, Anambra State, members of the group also clashed with the Police in Nnewi, leaving five persons wounded and over 50 arrested in the church.

Regional Administrator, MASSOB, Anambra South, Mr Mrs. Virginia Ubazuonu said members were attacked without while in the church to thank God for sustaining them this far.

Daily Sun learnt that trouble started after MASSOB mem­bers had arrived the church and got seated. However, some of the members who arrived later were accosted by the police at the Traffic Light, a stone’s throw to the residence of late Chief Chukwuemeka Odumegwu Ojukwu residence.

On getting information that their members were being ar­rested at the Traffic Light, other members in the church were said to have mobilized to know why there were problem with the police without any provoca­tion. There was a clash and the police started shooting which lasted for nearly thirty minutes. In the process, three MASSOB members were said to have sustained bullet wounds and the two people arrested were handcuffed by the police were rescued by their members who assisted them to the church for safety while the wounded were taken to an undisclosed hospital. She said the police later rein­forced with over ten trucks and arrested over 50 of her members at the church gate.

“They were shooting at us but we were approaching them until we rescued our members. We did not provoke them. But they decided to attack us,” one of the MASSOB members at the scene of the incident.

Meanwhile, Aba zone of the movement, yesterday were undeterred by police presence as they held their scheduled thanksgiving service.

The Movement effectively beat police strategy as it suc­cessfully held the service in three churches in the city.

The police had as early as 6.00am, stationed armoured personnel carrier (APC) and fierce looking mobile and regu­lar policemen in and around the Christ the king (CKC) Catholic Church where MASSOB had initially planned to hold the ser­vice.

Daily Sun gathered that members of the Movement got information days earlier about the police plan not to allow them access to CKC and made alternative arrangements for dif­ferent venues which they kept to themselves.

But unknown to the police, as they were keeping watch over CKC and its environs, members of MASSOB were at three different churches within the Obohia Road/Crystal Park Hotel axis holding the thanks­giving service. The celebration was also peaceful in Okpoko, Anambra State when MASSOB members marched through the streets, in disguise without put­ting on MASSOB regalia or symbol. However, they chant­ed freedom songs. They later converged on a secluded field where they hoisted the Biafran flag, displayed banners and ad­dressed journalists.

MASSOB zonal leader for Anambra Central, Chief Vin­cent Iloh in a speech said that it calls for celebration and glory to God that the struggle which started on 13th September 1999 has clocked 16 despite several bruises.

He announced the news of death of one of their member, Bartholomeo Onyeagba alleg­edly shot by the police in Awka that morning and another mem­ber also killed in Nnewi. He disclosed that they will continue fighting for the liberation of Ndigbo. He said that the strug­gle for self determination is a legal fight noting that those who fought for the independence of Nigeria from British colonialists were not hounded every time like their group.