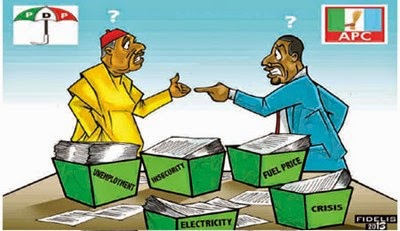 We’ve waited for the debate, that one which Nigerians would want to watch and listen to. It’s been long awaited but it seems it will never arrive as the electioneering processes enter gear four. Campaigns are ongoing at vehement speed. As expected, leaders on the opposing divides have being laying ambushes and throwing punches however from a distance. Faces are swollen but the challengers are defiant as they push to ensure they win. Nigerians want to see close punches.

Those who are doing the debate are the ordinary Nigerian citizens on the street many of whom have no PVCs, hardly get through a day but who are divided on their political views and thought pattern. They are usurping their energy, arguing over who is best choice and why one candidate is considered best choice over another. It’s amazing how clearly stated their arguments for and against the parties and their candidates are outlined. The tenacity and energy with which their arguments are laid, one could easily fall for them if they were actually party candidates. The problem though is that they aren’t the ones Nigerians are waiting to hear.

With some party demanding change and another demanding continuity, they live Nigerians with options, options of accepting the status quo, starting afresh with the change mentality or continuing on adding to what has being achieved. Whatever choices are being offered, Nigerians aren’t short of reasons why they are voting their candidate or why they are jumping off one bandwagon and into another.
Nigerians are very much alive to their political responsibility thanks to the choice provided by the change proponents APC. At least, there is another option and Nigerians will be all too welcoming to the possibilities that this choice presents. What Nigerians are unaware though is if the Change proponents are in any way capable of bringing about the change that they are telling everyone they will bring. From east to west north to south, the brooms are being wielded. We wait till after February 28 to know how much the brooms would have being able to sweep.

There have being calls for a political debate. Right thinking Nigerians don’t just want to be guided blindly nor do they want to follow the band wagons who are thinking neo a candidate. They want to hear from the horses’ mouth what they are offering. A debate offers the right platform for aspirants from the different parties to tell Nigerians how best they intend to solve the nation’s problems. It gives us firsthand evaluation of the candidates and their party’s plan of action against what the other party and candidate is offering.
It is sad to note though that candidates of some parties are absconding from these debates. These candidates have been feeding Nigerians through adverts of change they are offering. When opportunity arrives as it has being provided by international organizations and media houses for a one on one discuss where they could challenge their opposers first hand, Nigerians can’t find them. Yes, Nigerians may seem easy meat accepting every form of propaganda being offered by politicians whatever party it is, but they deserve to know what kind of change they will be offering.

We are aware Politicians are humane. They could confess change and blast at the top of their voice of what they intend to change but they won’t tell us the ones they are trying to replace have impacted in any way before. They give us lucid pictures of all the failures of the other guy while they hardly mention the impacts made by the guy and his team. The debate clears the air and removes all that entangling cobwebs and helps Nigerians define what truly they need.
I am bothered as I listen to the campaigns of one candidate or another. I hear the same old promises of roads, housing, employment and then a new wave of bias attacks on the opposition whether incumbent or intending. Radio campaigns against hateful insightful comments of politicians haven’t helped curb this new trend.

It’s great that Nigerians can bear their minds freely on how issues are run. Sincerely Nigerians must be proud of this achievement. The mistakes however we make and have being making is the bandwagon that we choose to jump into because we think everyone’s there. Most Nigerians are not supporting a candidate because they think that candidate has something to offer. They know by now that all politicians are the same however party they belong. They only jump in because they assume there is a wind of change blowing and they can’t afford to stand aloof.

If you are to be around politicians in their private discussions and meetings, those who are begging for your votes today, you’d be amused at what they say about voters and the populace. They know that they are promising too much than can be truly offered. They tell us the ideal situation and ideas but in real life, they know this won’t happen. But they must promise something and deceive the people to get the votes. They find one against the people campaigns as very open opportunity for the transmission of their “expected to fail” promises.

Political debates will help Nigerians measure thoughts and ideas with the actual capacity to bring them to fruition by their proponents. It helps us know whose idea is most workable within the timeframe they are offering us in open glare of Nigerians. We don’t want leaders who need eight years to change Nigeria, we need those who will work to achieve so much as they have promised us within the next four years or face being booted out.

Optimistic politicians are beginning to count the next eight years and what the future will be after that. They are already making statements and offering promises beyond even eight years. I actually listened to one politician campaign that after his eight years tenure he would give power to a certain section of his state as a promise just to get their votes, a case which may never happen.

As elections draw closer to St. Valentine’s Day, political hash tags supporting candidates are trending. What isn’t trending though is what the promises these politician are making. I hardly know what’s on offer or in the offering either on the side of APC the change movers or PDP the continuity proponents. What I know though is the deep hatred and divisions that exist between the two.

We’ve heard so much of propaganda on each side; every one politician telling us the opposition has one or two things to answer. Nigerians may assume these are truths and fall into the same traps like they have being prior to now. Politicians wouldn’t tell us the truth any way whether good or bad. But Nigerians deserve the truth. Nigerians deserve a debate, an opportunity for truth to reveal itself before we jump to the polls. We don’t want to vote liars in over and over again in the name of change or continuity, whatever party. We need a defined expectation for which we are throwing all our eggs. Our vote can’t count twice, it’s all we have.

In this new wave of political reawakening, whether its change or continuity, we deserve to know what will change and what will continue. Then, will we be helping create a free atmosphere for the right persons to lead us with Nigerians in mind.
IT’S YOUR VOTE, LET IT COUNT RIGHT.