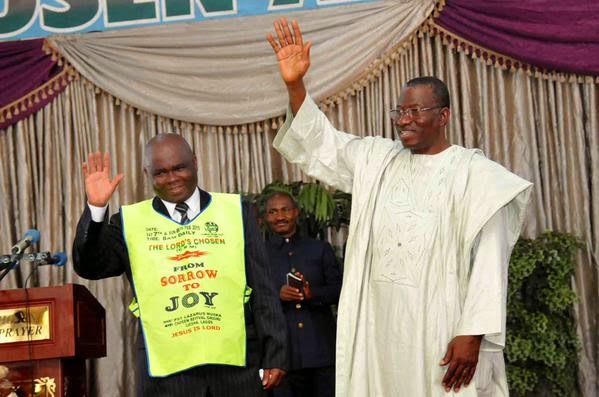 Feb 9, 2015 – Why Nigerian Pastors Should Stop Allowing Politicians To Campaign Inside Churches

I was discussing with a group of young people on how the elections will go and what direction they think the next government will be directed. We talked extensively about the Buhari option, the APC change dictum and the promises or cons of the choice over the incumbent. Some person who was by my side listening made an outburst “he is an extreme Muslim” to the anger of the group who shut him down with claims of religion as unimportant when compared with performance.

I calmed the group but I informed them what important role religion is going to play and has being playing in global politics. They argued on till we accepted it would be a topic for discuss for some other day.
As I browsed through the internet, I came across a viral image depicting Jesus holding an umbrella over one of our parties’ candidate on one of the social mediums. Politicians are finding shelter in religion as they seek for strong voice and popular vote. Religion seems to be playing very important position today more than ever as campaigners are seizing on the hugely religious nature of Nigerians and the participation of a pastor of a popular big church as vice presidential candidate of one of the political parties. 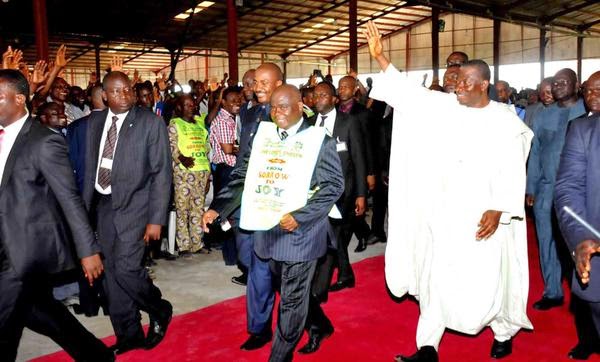 Along Christian lines, there is huge division on where the better angel lies. Pastors are in the divide; those who are neo Jonathan a Christian candidate of the PDP and neo Buhari, a Muslim candidate with a Pastor Vice of the APC. Politicians are using churches as campaign grounds as they move from Sunday to Sunday to different church meets in a bid to arouse interest from church followers.
Newspaper campaigns of pastors recommending one political candidates over another has being rife. I happened to stumble on one last week and I smiled. Nigerians have being eager to hear what some of our super men of God would say about what they think is God’s choice. It amuses me that those pastors who are calling for change today were the same who said God had chosen the incumbent.

I am particularly bitter at how our religious ministers are making wreck of the Christian faith by joining hands with politicians. Politicians will be politicians whatever sheep clothing they may put on. They try to cheap votes. Where else will they run to? To the church, where maybe pastors can run miracles in the name of a politician and get stream of followers supporting the politician.

Churches are tearing apart as pastors recommend to their congregation, one politician over another. Greed stands between a now duo Christian camps. It seems God is saying candidates from the dual divide will win and serious prayers are being made on both sides to ensure both candidates win. The question that beckons on a thoughtful mind is, is God an author of confusion? Of course not.

It’s especially disturbing that our politicians are running skelter to our pastors to have them prayed for and given blessings ahead of the elections. Candidates are said to be even trying to get pastors to their side. One particular renown pastor is debacle between supporting the change proponents of which one of his spiritual sons is involved with and incumbent president who is doing all he can to also get the blessing of the renown pastor whose church membership is counting in millions. It’s becoming a comedy of some sort. I wonder how Prof Osinbajo had felt when he saw Mr Jonathan in his church and his G.O praying for him.

Pastors are throwing stones across the divide as they try to help their politician get enough votes. They are even beginning to talk more like politicians than pastors, cursing and hitting hard at the pastors and politicians at the other side of the divide. The pastors are prophesying good tidings for their candidates as “God Says” when indeed they have heard nothing. But they must prophesy anyway to prove their alienations to their political boss. Pastors even make statements like “God is a Politician” to support their political leanings.

Politicians are personalizing God and finding some way to let people know they are. In which party do we find more Christians in their hierarchy? In which party do we find more Muslims in their hierarchy? Someone is trying to instigate Nigerians to vote by the number of Christians or Muslims in the parties.
It’s true that Nigeria is divided in strong religious compartments. Some religious Nigerians are definitely supporting the pro-religion concoction that they would only support candidates of their religion as they assume the candidate from the other religion will act pro his religion.
Imams are not left out in these dual party divisions. Those who are anti Christian in totality are backing off from APC whose presidential candidate seems surrounded by a strong Christian hierarchy and choosing rather to back the PDP option who have a mild Christian candidate but surrounded by Muslims.

Religious proselytes often see their spiritual leaders as little gods and politicians assume that this leaders will influence how their members will vote once they preach them into the politics of the time.
Many Nigerians though are not really concerned about the religious divides that characterizes our political and social era. They are choosing to vote anyway whether the candidate is a member of their religion or not. Their concern is the nation and the capacity of the politician to deliver on the people’s expectation.

As correct Nigerians, we must disabuse our minds with the religious pranks being played out there by our religious leaders and politicians. We should vote based on determination and capacity to deliver. God has not anointed any leader over us. No. God will determine who leads us by how we vote. Remember, voice of the people is the voice of God. Vote right and let it count for Good.