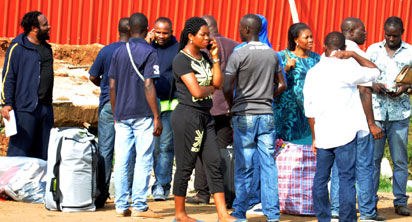 June 27, 2017 – 23 Nigerians Deported From Spain: 9 Handed To NDLEA For Drug Dealing, 2 To Police For Criminal Offences, Others Released

Another set of Nigerians have been deported from Spain barely a week after 34 Nigerians were sent home from from Switzerland, Germany, Iceland, Austria, Belgium and Hungary for immigration related offences.

NAN gathered that the new set of deportees arrived at the Murtala Muhammed International Airport (MMlA) Lagos, at about 6.40 a.m on Tuesday.

The new deportees, comprising 21 males and two females, were brought back in a privilege style aircraft with registration number EC-IZO.

DSP Joseph Alabi, the spokesman of the Lagos Airport Police Command, confirmed the development to NAN.

Alabi said that the deportees were received by officers of the Nigerian Immigration Service (NIS), the National Agency for the Prohibition of Trafficking in Persons (NAPTIP) and the Police.

He said that others also on ground to receive them were officials of the Federal Airports Authority of Nigeria (FAAN) and the National Drug Law Enforcement Agency (NDLEA).

According to him, nine of the deportees, who were deported for drug-related offences, were handed over to the NDLEA.

He said that two others, who were deported for criminal offences, were handed over to the police.

Alabi said that the remaining 12 deportees, accused of breaching the country’s immigration rules, were profiled and allowed to go to their respective destinations.

Continue Reading
You may also like...
Related Topics:deport, Nigerians, Spain