Dec 8, 2012 – 2Face Idibia Confirms Secret Wedding with Annie Macaulay In Lagos: Why I Married Her Secretly

In this recent interview culled from Punch, African Queen crooner, Tuface Idibia spoke at length on why he chose to marry his beautiful wife, Annie Macaulay secretly in Lagos naijagists.com

In the interview 2face said he did the secret wedding in order to avoid hurting the feelings of his two other baby mamas namely Pero Adeniyi and Sumbo Ajaba.

He said his wife, Annie has been through a lot with him.

Tuface Idibia currently has 6 children with 3 different women (1 with Annie, 3 children with his US-based baby mama Pero Adeniyi, and 2 kids with Sumbo Ajaba). See their pictures below 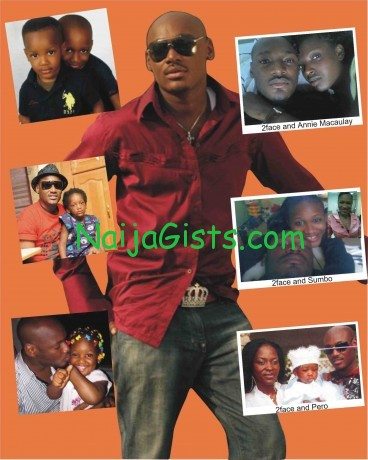 Hear Tuface in his own words below:

“Annie is my first and true love. I had known her before I met the other women in my life. As a Christian, I had to marry one woman and it just had to be Annie. We had a secret wedding after we had reached an agreement and amicable understanding about the mothers of my children. It was a tough decision to make, one of the toughest in my life.

“I secretly married her because I have so much respect for my other babies’ mothers; I cannot afford to hurt their feelings with a sudden society wedding with Annie, not now. I chose her above the others because she has been through it all with me.”(2face told Punch)

Whether na society or secret, his other baby mamas are already aware.