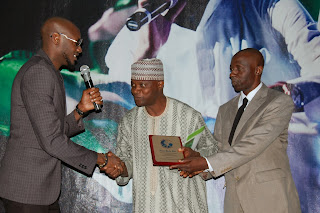 Three winners emerged from the 2Face Peace Awards which held on Saturday, Sept. 21 2013 (World Peace Day) at the Nicon Luxury Hotel Abuja. They received N1 million each to use in furthering the various peace causes they have been involved in. 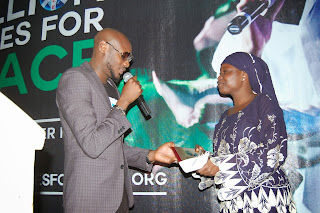 The Awards kicked off the Million Voices for Peace campaign being run by the 2Face Idibia Reachout Foundation. The winners were selected from a pool of young people aged between 18 to 35 whose initiatives helped in promoting peace in their areas for at least 18 months.

The winners were: Kyenpiya Jessica Makan-Nyabam of the CLAPAI (Child Love And Protection Advocacy Initiative) Orphanage, Jos. CLAPAI was set up in 2006 by Kyenpiya and her husband, Emmanuel, an ex-professional footballer, to cater for children orphaned, affected or infected by HIV/AIDS. They also care for children outside the orphanage and Emmanuel uses sports to engage the older youth in the community to foster peace.

Second was the Christian Muslim Peace Movement which is based in Bauchi and Jos. They are a group of young volunteers led by Aminu Garba Sidi who do conflict mediation, peace sensitization and other activities in schools and communities. They also work in NYSC camps and are contact persons and mobilizers for other peace projects in Nigeria.
The third winner was Zainab Sandah who also received an honourable mention. She is involved in mobilizing and assisting the conflict prone Rigassa community in Kaduna in their efforts to access public sector education. She assisted in setting up a VSAT with computers for a community skills centre. 2Face charged the winners to continue in their efforts to support the poor and promote peace in Nigeria.

He explained that the MVP was meant to re-orientate the “mindset of Nigerians to realise the senselessness in many of the conflicts and killings going on and let them know that peace is the only condition for progress.

“Most times when they tell you the reason for some of the conflicts,you will be very surprised and disappointed.

“As award winners, you are now peace ambassadors. People will be more interested in what you do. You have to continue to maintain the high standards you have set,” he said.

Present at the event were the president of the Kudirat Initiative for Democracy (KIND), Hafsat Abiola-Costello, who gave a speech urging the rich to support d poor more; the Director of the National Orientation Agency (NOA) who represented by David Manya Dogo and Prof Braide, DG IPRC and the representative of the First Lady’s Peace Mission Mrs Betty Bassey.
The 2Face Peace Awards was supported by APURIMAC, Action AID, UNDP and KIND.