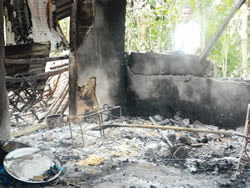 A tenant of a house on Asuquo Eyo Street, Ifa Ikot Okpon, Uyo Local Government Area of Akwa Ibom State, identified simply as Ime, aka Shawa, has been accused of killing his landlord and the wife and also setting the house ablaze.

It was said that Ime, 40, had attacked his landlord, Mr. Edem Akpan and his wife, Affiong, with matchete before setting the house on fire.

One of the daughters to the late couple, Ms. Emem Akpan, told our correspondent that trouble started when her father gave Ime a quit notice.

She said Ime had threatened that if her father insisted on sending him (Ime) out, he would kill him and burn down the house.

She said, “We thought it was just a mere threat. None of us could believe that Ime was capable of doing what he said.

“Two days ago, we saw him bringing worn out tyres into the compound. We didn’t know he had a plan.

“Yesterday (Sunday), before we left for church in the evening, he brought 20 litres of fuel, more than what his generator could contain.

“A neighbour asked him what he wanted to do with such quantity of fuel, but he told him that he was going to run the generator overnight.

“This is what we saw this morning as we returned from church – the fuel and worn out tyres were weapons used by the assailant to kill my parents.”

Another daughter and ex-girlfriend of Ime, Ms. Ruth Jeremiah, said she parted ways with Ime a year and three months ago.

She said it was because Ime did not let her know his parents and his surname that made her to terminate the relationship.

She said that for the three years she dated Ime, she did not know anything about him except his alias – Shawa.

“I decided to end the relationship with Ime because he was not straight forward. He wanted to marry me, but whenever I asked him to take me to his people, he would refuse,” she said.

She stated that Ime had removed his property in the house before killing her parents and setting the house ablaze.

Asked if there was tenancy agreement which could lead to the arrest of the assailant, Jeremiah stated that there was nothing like that as the father offered Ime his house based on a gentleman’s agreement.

Efforts to get the Police Public Relations Officer, Akwa Ibom State Police Command, Mr. Etim Dickson, to speak on the matter, proved abortive as calls and texts to his telephone were not replied.