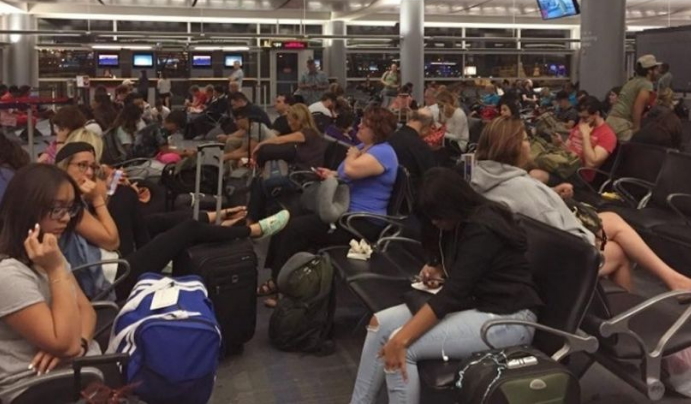 Delta Airlines flights worldwide including those coming to Nigeria were grounded due to a computer failure. The airline which aircraft lands at Lagos was yet to arrive as passengers are frantically getting to be rebooked on another flight.

As at 7pm Monday, there was no sign that the flight would arrive while an airline worker said Delta does not operate to Lagos on Monday as it has reduced it daily frequency to the Murtala Muhammed Airport, Lagos to six times a week.

The airline reported earlier the ‘systems are down everywhere’ causing chaos. Consequently, not a single Delta plane could take off for five hours on Monday morning.
Travellers had been waiting up to six hours after issues began overnight as the airline cancelled 300 flights as a result of the widespread problems.

Passengers hoping to travel on the carrier reported long delays as boarding passes were even being written out by hand at check-in desks. The airline has 325 destinations in over 60 countries on six continents. Tens of thousands of Delta Airlines faced huge delays after a crippling power cut at the company’s headquarters.

The glitch caused a global computer failure that meant none of the airline’s planes anywhere in the world could take off for more than five hours on Monday morning.