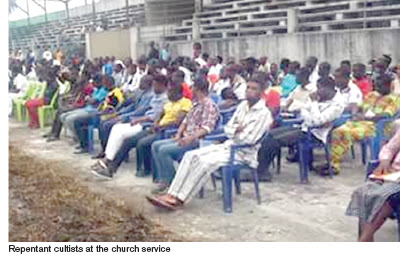 Christian communities in Gokana Local Government Area of Rivers State organised a deliverance session for over 3,000 repentant cult members, who denounced their membership.

The deliverance was facilitated by a group of clerics, led by Rev. Fr. Abel Abulu, in collaboration with Gokana Peace Ambassadors, who have been going round the creeks of Gokana , to campaign for peace due to widespread of cult-related violence which claimed many lives.

Father Abulu of St. Patrick’s Catholic Church, Budor, expressed concern that lives of innocent people were being taken almost on daily basis, while economic activities have been grounded in the area. He called on other religious bodies to help in the fight against cultism and kidnapping.

He encouraged the repentant cultists never to go back to their old life, but to put their trust in God for a better living and development of the local government and the state.