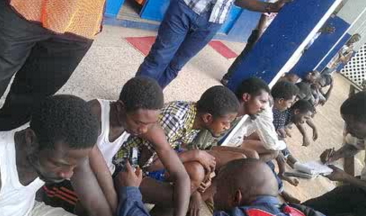 4 armed robbers have been sentenced to death in Ibadan.

The convicts 30-year-old Akinola Alaba, 25-year-old Babalola Sarafa, 27-year-old Kolawole Sola and 28-year-old Gbedeogun Ibrahim were accused of stealing a phone valued at N10,000 on the 16th of October 2011 at Gangansi in Oritamerin area of Ibadan.

Armed with guns and cutlasses, they reportedly attacked their victim around 4:30am.

Another suspect 30-year-old Garuba Asumo was also sentenced to death for killing one Rasaki Ayomo at Oke Area, Ijaye Moniya on the 12th of September 2012 around 8:30pm while he was about to buy bean cake (moin moin).

The death sentences were handed down to the convicts by Justice Rayo Taiwo at an Oyo State High Court sitting in Iyaganku, Ibadan yesterday.