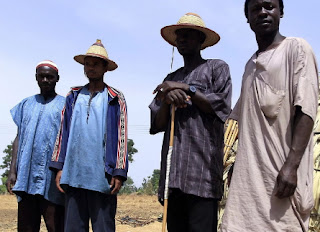 The suspects were also alleged to have earlier abducted a son of another Fulani herdsman in the community but the boy was said to have released after a ransom was paid by his father.

Joseph explained that the suspects had confessed to be part of the kidnapping gang who carried out their ‘operations’ at the Akoko area of the state in the recent time.

“One Mohammed Gambo came to report to us that the kidnappers abducted his son and he paid a sum of N200, 000 before the boy was released but he did not inform the police before making arrangement with the abductors, it was after the boy was released that he reported to us.

“The same persons abducted another women, Hadiza Saliu on December 13, 2017. As they were demanding ransom from the husband of the woman, the victim ran away. So after the victim had escaped the abductors started calling the husband to demand ransom.

“After reporting to us, we asked them to provide the money (ransom) and our men with some local vigilante groups laid ambush for the kidnappers who later came and pick up the money.”

The PPRO said one of the suspects; Adamu was arrested when he got out of the bush to pick up the money, adding that it was after his arrest that the police discovered that the same kidnap group was responsible for the abduction of the son of Gambo who had earlier reported to the police.