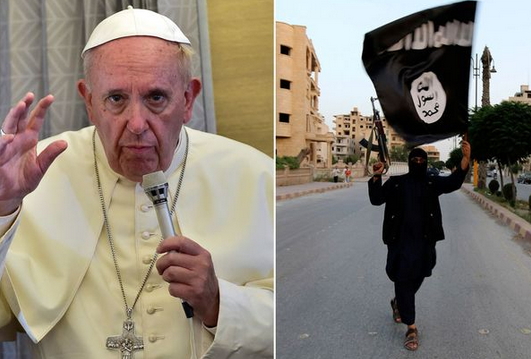 4 terrorists have been arrested over alleged threats made by jihadists to kill Pope Francis.

The arrests, made in Italy and Kosovo, were conducted by anti-terror police who had been monitory a “highly dangerous group” on social media.All four were Kosovan nationals said to have links to Syria. Police said threats had been made warning Pope Francis “would be the last Pope”,

Police said “the [alleged] terrorist team propagated the ideology of jihad through social networks”.
The alleged ‘ringleader’ of the group is believed to have lived in Italy before being arrested in Kosovo.This won’t be the first time the Popehas been threatened.

Infact,the Pope made light of the threats in an interview with La Carcova News, saying:

“Life is in God’s hands. I have said to the Lord, ‘You take care of me. But if it is your will that I die or something happens to me, I ask you only one favour – that it doesn’t hurt. Because I am a real wimp when it comes to physical pain’.”