June 13, 2017 – 4 Killed As Armed Thugs Chased Melaye Out Of Kogi While Protesting Against His Planned Removal

4 people, including a student of the Kogi State Polytechnic, Saka Saidu, were on Monday confirmed dead in Lokoja, the Kogi State capital, following clashes between supporters of Senator Dino Malaye (APC-Kogi West) and loyalists of the state governor, Alhaji Yahaya Bello.

The incident which occurred at the end of a rally organised by the lawmaker against his planned recall from the National Assembly, turned violent when some unknown gunmen infiltrated the venue, shooting indiscriminately.

Melaye, who had boasted that no one can recall him from the National Assembly, called on the state government to pay civil servants their salaries and to reopen tertiary institutions in the state.

Pandemonium, however, set in at the rally which took place close to the main gate of the Kogi State Polytechnic, when suspected political thugs opened fire on Melaye as he alighted from the roof of his SUV. 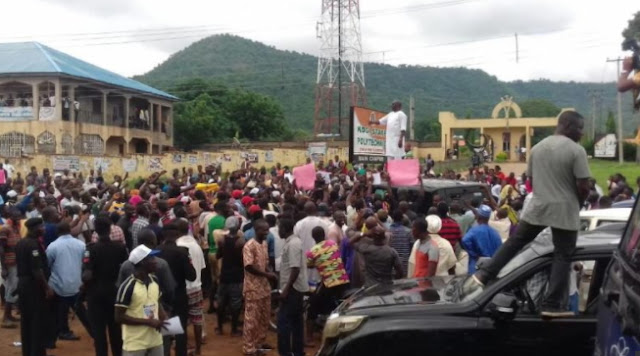 The lawmaker escaped by whiskers, as his security details quickly guided him into the vehicle, leaving behind raging exchange of fire.

The incident which took place in Felele, along the Okene-Lokoja-Abuja highway led to a gridlock, as people abandoned the vehicles in which they were travelling.

Melaye, however, said that three people were killed and several others were injured by those he described as agents of the government.

While the lawmaker escaped unhurt, not so the others, including a security personnel who sustained gunshot injuries.

Melaye said two of the State Security Service (SSS) attached to him were shot by the gunmen.

He alleged that the Special Adviser to the Governor on Security, Commodore Jerry Omodara (retd.), the Senior Special Assistant on Political Matters, Mallam Abdul Dolla and the Special Adviser on Multilateral, Mr. Adoga were present at the scene during the attack.

The Rector of the state Polytechnic, Mohammed confirmed that a student was by bullet shots, while a security personnel from the institution who was also shot, survived.

Governor Yahaya Bello who later visited the scene of the incident at about 3.15pm expressed shock at the development and ordered an immediate investigation.