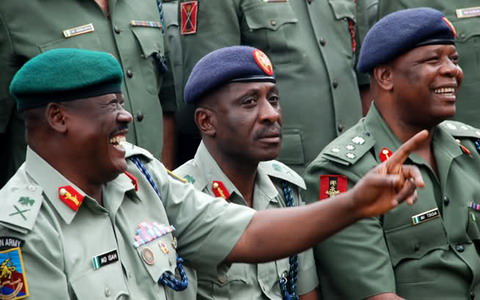 Angry soldiers who didn’t receive any allowance during the Peace Keeping Operations in Liberia and Sudan between 2013 and 2014 have filed a petition to investigate five Nigerian Amy Generals for corruption.

If the only hope of mankind today the United Nations can collaborate with Nigeria to divert the money meant for payment of Nigerian soldiers who participated in Peace Keeping Operations in Liberia and Sudan, it will be right for one to say that the entire universe is doomed and heading towards destruction.

The United Nations is known for standard, transparency, justice, fair play and equality but, it is worrisome how this honorable body or few members in this body have targeted Nigeria and descended too low to collaborate with some born-cheat generals in the Nigerian Army to divert soldiers Operation Allowances into their private pockets.

It is on record and verifiable that over 3,950 troops who participated in Peace Support Operations in Liberia and Sudan between 2013 to 2014 are still been owned various months of allowances amounting to over $43.23m US Dollar which is equivalent to N6,919,168,000:00 Billion Nigerian Naira to date. The 800 soldiers from 223 Armour Battalion Zuru, Kebbi State, that served as Nigerian contingent NIBATT 40 at Nyala Super Camp in Sudan Darfur region between June to December 2013 are still being owned 2 months allowance while the 800 soldiers of 15 Field Engineering Regiment Ijebu Ode that served as NIBATT 33 at the Central Monrovia in Liberia between September 2013 to March 2014 are being owned their operation allowance for over 7 months of their return. The 800 soldiers from 322 Artillery Regiment in Benin City that served 10 months in Labado Sudan as NIBATT 41 returned to Nigeria in June 2014 only to meet 1 month operation allowance in their domiciliary account while the balance of 9 months disappear as their counterpart with no one to give account of it till date.

It was also gathered through an authentic sources that the domiciliary account of the 800 soldiers of 342 Artillery Regiment Obinze Imo State currently serving in Nyala Super Camp South Sudan as NIBATT 43 for 8 months now are red as no dime have been deposited into their account. This also applies to the 750 soldiers of 311 Artillery Regiment Kontangora, Niger State currently serving as NIBATT 34 in Liberia.

When on 11 February 2014, the Nigerian National dailies Punch newspaper published this issue, with a view to finding a solution to this ugly trend, the dubious Nigeria Army through its Public Relations Officer. Brig Gen Olajide Olaleye came up with their lies and deceitful propaganda that “it was not true that the Nigerian Army was owning soldiers arrears of operations allowances”, and to cover up their secret deals within 48 hours they paid in 4 months operation allowance into NIBATT 40 troops domiciliary account remaining 2 months which are yet to be paid till date after 8 months of their return from the operation area.

The questions that remain unanswered are:

1. Why is United Nations owing only Nigerian Peace Keepers after sacrificing their lives to bring peace to the troubled regions?

2. If the United Nations have paid the Nigerian military authorities or the Federal Government, where are the monies, who is with it?

3. Are the authorities concerned waiting for similar Akure incident to occur before they address the issue?

4. Is the Army Chief Lt Gen KTJ Minimah not aware that such monies are been owned to his troops by UN or is released by UN and hijacked by his generals leaving these soldiers who have painstakingly and diligently served this nation in foreign land to suffer endless hopes for their overdue allowances?

5. Why should the Army Director of Defence Information, Major General Chris Olukolade in his response to the Punch publication of 11 February, 2014 deceive the soldiers and lie to the nation that “the money is not missing and that the authority is working round the clock to secure the funds from the appropriate quarters and relevant agencies sponsors of the mission”.

6. For over 8 months Army authorities have been working round the clock to secure money that we well know that United Nations MOU with troops contributing countries states that UN pays at the inception of each tenure.

7. If this is not one of the Nigerian Army general’s lies and deceits, let the Director of Defence Information, Major General Chris Olukolade tell us and Nigerians who are the appropriate quarters and relevant agencies sponsors of the mission that are hijacking these soldiers allowances as he claims?. Is it UN, the Presidency or COAS?.

8. If the UN is owing Nigeria for over 8 months now as claimed by our generals, where are they getting the $100 and $200 US Dollars respectively that they pay to each troops in Sudan and Liberia in operation area monthly as maintenance allowances?

Considering the present security situation in the country, this is a bad omen. 3,950 soldiers being owned such a staggering amount could revolt and this will not be good for our country. Let us use Akure incident as a lesson and do something before this issue gets out of hand.

It is obvious that lies and deceits have become a tradition among Nigeria Army generals. They always devise ways to sweep matters that touches them under the carpets with cover ups. Here under are the names of the various units that have served either in Sudan or Liberia with the Nigeria banks where they opened their domiciliary account for anybody who wish to verify the authenticity of this report.

NAMES OF UNITS, THEIR NIBATT AND BANK USED FOR DOMICILIARY ACCOUNT IN NIGERIA FOR COMFIRMATION

THE PRINCIPAL ACTORS IN THIS MATTER ARE: