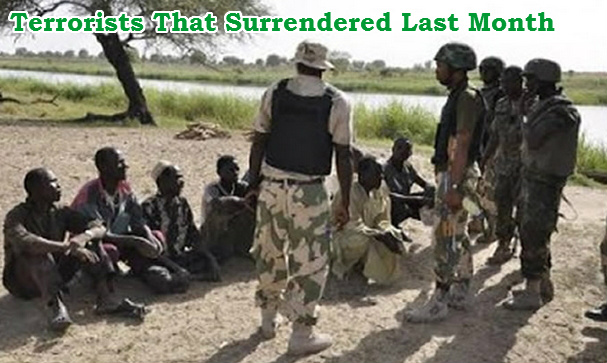 The military says scores of terrorists in the North-East have continued to surrender to troops in the frontline due to sustained offensive by ground troops and pre-emptive air strikes by Nigerian Air Force.

A statement issued on Sunday in Abuja by the acting Army Director of Public Relations, Col. Sani Usman, said more terrorists have also indicated willingness to lay down arms.

The statement said the ground troops had also adopted routes blocking strategy in a bid to `constrict and snuff out’ the Boko Haram terrorists from their hideouts.

“Many of the terrorists that willingly surrendered painted images of mass panic and hysteria among their erstwhile colleagues.

“They said their colleagues are feeling the noose tightening on their necks with the relentless efforts of troops and renewed vigour in the operations inspired by the personal leadership of the Chief of Army Staff.
“Terrorists also seem to have an inkling of what happens to surrendered suspects as regards screening and de-radicalisation of innocent ones among them,’’ it said.

The statement said the military would continue to receive surrendering suspects and assured innocent ones among them that `surrender is the only option open to them.’