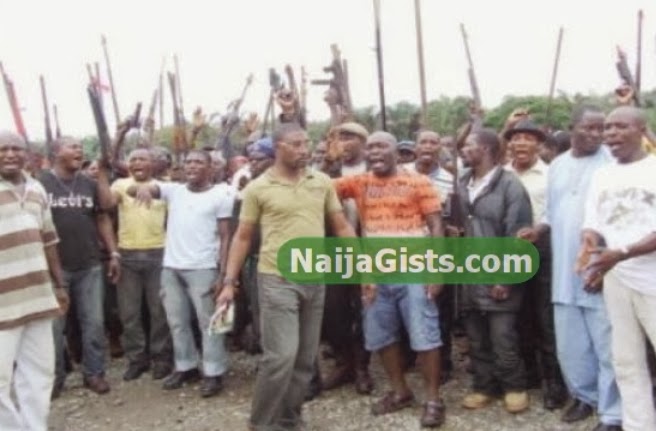 The young cultists attempted to forcefully take over the Government House, but were repelled by security operatives attached to the seat of power.

There was a heavy shooting by the security operatives comprising policemen, men of the Nigeria Security and Civil Defence Corps, NSCDC and soldiers who succeeded in preventing them from gaining entry. One of the invaders was, however, shot dead and three arrested, while others escaped with wounds.

Several machetes were recovered from the fleeing members of the gang.

Although the mission of the young men, who were armed with several machetes and flags with different inscriptions and insignia belonging to some secret cults is yet to be known, an eyewitness said they arrived the Government House at about 4.30 am in buses.

They reportedly parked their vehicles along Nza Street and marched to the Government House gate where they met the security operatives.

They were said to have told the security men to open the gate claiming that they were at the Government House on protest. But when one the NSCDC officials opened the gate to ask why they decided to come in the night, one of the invaders gave him a machete cut on the hand and made attempts to force the gate open.

Sensing danger, the security operatives rushed out only to see many of them wielding machetes and giving orders to their members to move into the Government House.

The Chief Security Officer to Governor Sullivan Chime, Mr. Fidelis Ogarabe, DSP, who rushed to the scene after he was alerted by his men, immediately took control of the situation, as the security operatives succeeded in repelling them after hours of shooting.

The security operatives pursued them from the Government House premises into the Independence Layout, but only succeeded in arresting three.

It was learnt that the young men ,some of whom tied red bands on their arms similar to those of the Bakassi Boys operating in some states in the South East, dodged the bullets as they were suspected to be wearing local bulletproofs popularly called Odieshi in Igbo. In an official reaction to the development yesterday, the Chief Press Secretary to Governor Sullivan Chime, Mr. Chukwudi Achife said “vigilant security personnel attached to the Government House Enugu early this morning foiled an armed attack on the Government House.”

Achife said, “the attack occurred when at about 4.30 am a group of young men numbering about 50 and carrying machetes and cutlasses invaded the Government House and tried to force their way in.