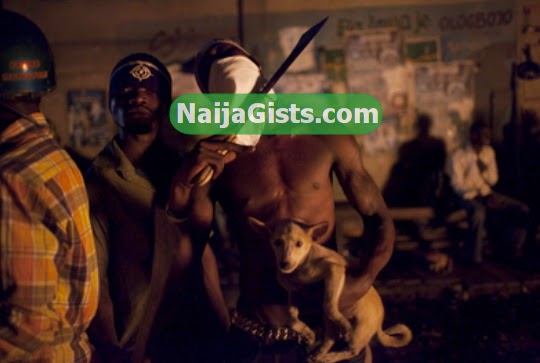 Akala Boys & Toheeb Gang, Cult Group Robbed 8 Streets In Mushin Lagos From 12am To 7am On Easter Monday

There were fears and tension in the Mushin area of Lagos State on Monday morning after about 60 robbers operated on no fewer than eight streets and destroyed about 30 vehicles.

Some residents told our correspondent that the robbers also raped some young ladies and operated unchallenged for about seven hours.

A mosque on Coker Lane was not spared as the worshippers, who slept in the mosque after a vigil, were robbed by the hoodlums.

One of the people in the mosque told PUNCH Metro that the robbers fired bullets for over one hour before robbing from house-to-house.

He said, “It was around 12am on Monday morning that we started hearing gunshots. It lasted for about an hour.

“Around 1am, they started going from house-to-house, robbing the occupants. They stole about seven laptops from the house opposite this mosque. They stole phones, money and everything they saw. They came inside the mosque and took our phones and money. People were crying throughout the night. It was terrible.”

Another witness said the robbers were not in a haste. He said they robbed till 5am and came back at 6am to continue before leaving around 7am.

Our correspondent observed that a generator was also removed from its shed by the robbers. Vehicles parked on the streets were vandalised by the robbers, just as two Toyota Hilus van were burnt.

Our correspondent counted 20 vehicles, but some residents said about 10 damaged cars had been taken away by their owners for repairs.

Kasali Daramola, a driver who spoke while fighting back tears, told our correspondent he owned one of the burnt vehicles.

He said, “This is the third time they will do this to me. What have I done to them? The first was a Lexus car my younger brother bought for me, which I was planning to sell to acquire a commercial bus to take care of my four kids and wife. I sold the scrap for N30, 000. I used the money I raised to get a bus and I was paying for it by installment. I have not finished the payment when they destroyed it.”

Daramola said the men entered his house and some of the ladies living there were raped.

He said attempts to bring in the police were abortive as they kept saying they were on their way without showing up.

A resident said, “For over five years now this area has not known peace. Will the police say they cannot do anything about it? Around 7am that policemen came here, they still saw some of those robbers around, but did not do anything. Why? I believe the police know all the people causing trouble here and if they want to do something, it doesn’t take them anything.”

Tosin Gbolahan, a resident, said a policeman attached to Alakara Police Station was with the hoodlums on Monday morning.

He said the hoodlums took advantage of a carnival that was held the previous night on Ojo Street to perpetrate the havoc.

The Police Public Relations Officer, Lagos State Command, Ngozi Braide, said she would call back, but she had yet to do so as of press time.