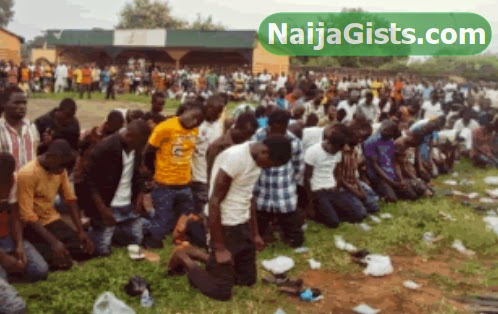 The group who are members of the Black Axe cult group were caught on Sunday at Effoi village forest very close to Eket.

This was made known by Police PRO, Etim Dickson during a news briefing this morning.

Police image maker who was present during the arrest said they recovered the following items from the initiation spot; container of blood, 2 motorcycles, 10 cell phones, 3 cars, 5 berets with Aye inscription, 2 axes,  2 drums and 5 live cartridges.

He said that all the suspects confessed to being members of ‘Black Axe’, adding that they would be charged to court soon.

“All the suspects will be charged to court. You know the activity of cult group is becoming too rampant,” Dickson said.