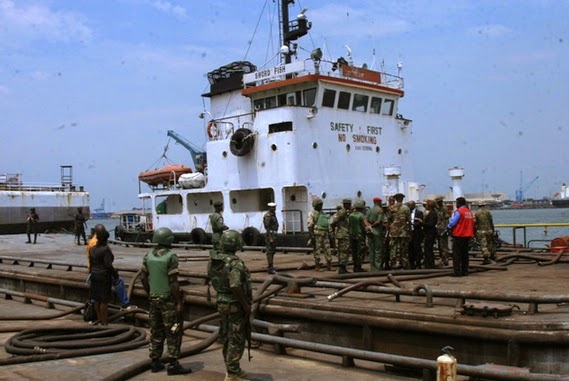 The Nigerian Navy Ship (NNS) BEECROFT on Wednesday in Lagos said it had arrested seven suspects for stowing away in a foreign vessel bound for Spain.

He said, “Preliminary investigations revealed that the arrested persons boarded the vessel while it was discharging its products and their intention was to follow the vessel to Holland.
“On completion of its operations, MT ELECTRA BARI with IMO number 941682 left for Lome, Togo.
“It was while in Togo, it discovered some strange people on board and established communication with NNS Ship Ikot -Abasi.
“They now effected the arrest of seven stowaways.
“The suspects have been handed over to the Nigeria Immigration Service for further investigation and prosecution.”

He also stressed that the Chief of the Naval Staff, Vice-Admiral Usman Jibrin, had zero tolerance for all maritime crimes within Nigeria’s space.

He called on the criminally minded elements to seek legitimate employment in stead of engaging themselves in “untoward activities”.

The stowaways were said to have sneaked on board an international maritime vessel; MT ELECTRA BARI ship, which had come to discharge petroleum products at Apapa tank farms.
But were arrested off the Fairway buoy, Lagos.

The captain of the vessel was said to have detected the stowaways and drawn the attention of the commander of NNS Beecroft, Commodore Tekumo Ikoli.
One of the stowaways, Asamua said this would be his second attempt after the first attempt to enter Europe illegally.

Another stowaway, Madu, blamed frustration for attempting to travel abroad.
Also speaking,Omomobi said they tracked the ship’s destination from a device installed in their phones and then picked on the one they deemed useful.

An NIS representative, Supt. Oloruntoba Gabriel of the Marine Command, received the stowaways from Navy.

He said investigations would continue with a view to ascertaining the claims of their nationalities before they could be prosecuted.